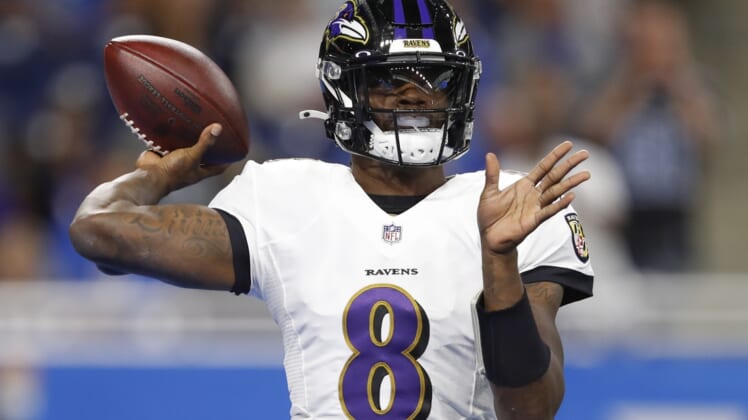 Baltimore Ravens quarterback Lamar Jackson has a sore back and missed practice Thursday for the second straight day.

“I don’t think it’s anything serious,” Roman said before practice. “But we’re just going to have to kind of wait and see. I think he’s going to be in good shape. We’ll wait and see.”

Jackson has missed only two games in his three-plus seasons since the Ravens selected him No. 32 overall in the 2018 NFL Draft. Neither was for injury. He sat out the final week of the 2019 season because the Ravens already had clinched the No. 1 seed in the AFC, and missed another week in 2020 following a positive COVID-19 test.

If the 24-year-old Jackson can’t play Sunday in Denver against the undefeated Broncos (3-0), the Ravens would be without their starting quarterback and top rusher. With three running backs out for the season, including J.K. Dobbins and Gus Edwards, Jackson leads the Ravens in rushing with 251 yards on 35 carries — good for fourth in the NFL and trailing only Derrick Henry of Tennessee (353), Cincinnati’s Joe Mixon (286) and Nick Chubb of Cleveland (262).

“We definitely want him and everybody out for every practice,” Roman said. “When they’re not, we adjust accordingly. Thankfully, we’ve been in this system going into three years now. With Lamar, it’s a little bit different than a guy who just got here.”

In three games this season for the Ravens (2-1), Jackson has completed 53-of-87 passes for 761 yards with three touchdowns and three interceptions.