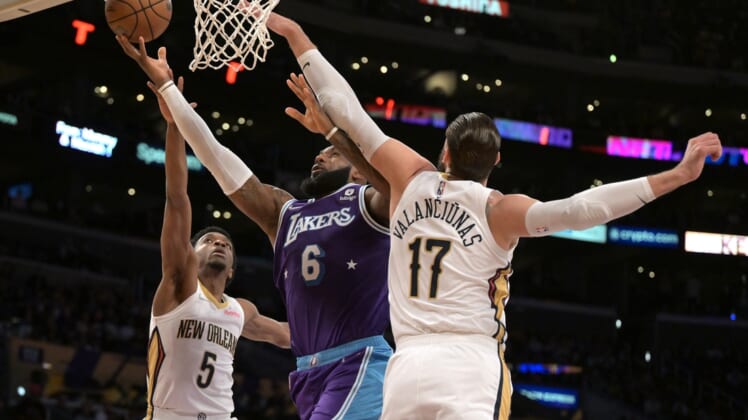 CJ McCollum scored 32 points and Brandon Ingram added 29 as the visiting New Orleans Pelicans helped their play-in tournament cause with a 114-111 victory over the Los Angeles Lakers on Friday.

Despite the return from injury of both Anthony Davis and LeBron James, the Lakers lost their fifth consecutive game as their hopes of playing at the conclusion of the regular season continued to fade.

Davis produced 23 points and 12 rebounds in 37 minutes after missing the past 18 games due to a mid-foot sprain. James, who sat out three of the previous four games with an ankle sprain, compiled 38 points and eight rebounds in 40 minutes.

The Lakers had a prime chance to gain ground on the Pelicans over the last week, but the Friday loss came after a 116-108 defeat at New Orleans on Sunday.

Davis and James both were game-time decisions for Lakers coach Frank Vogel, but both were in the starting lineup. The Pelicans led 30-25 after one quarter before Los Angeles held New Orleans to 20 points in the second quarter, leading to a 50-all tie at halftime.

James had 21 points in the third quarter alone, his highest for a single quarter this season, as Los Angeles took an 87-86 lead.

The Lakers pulled within 112-111 on a 3-pointer by Avery Bradley with 16.5 seconds remaining, but two free throws by McCollum put the Pelicans up by three with 9.4 seconds left. James missed a 3-pointer at the buzzer that would have tied the game.

The Lakers’ Carmelo Anthony was out because of a non-COVID illness.