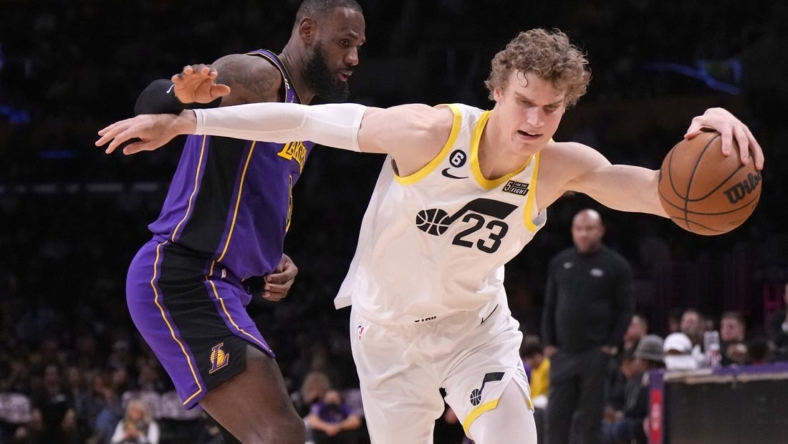 In an interesting scheduling quirk, the Utah Jazz and Los Angeles Lakers will meet Monday night in Salt Lake City after the two teams both played a pair of games in L.A. over the weekend.

As far as basketball goes, the Jazz certainly had the better weekend.

Utah defeated the Lakers 130-116 on Friday and then downed the Clippers 110-102 late Sunday night. Los Angeles lost its meeting against Cleveland at home Sunday afternoon before traveling to Utah.

Those results align with how the season has started for the two teams — surprisingly good so far for Utah, which is off to an unexpected 8-3 start, and surprisingly bad for the Lakers, who have only managed to win two of their first nine games despite having a star-studded lineup.

The Jazz looked like they might have been en route to a road loss Sunday after the Clippers erased their 10-point lead to go ahead by four in the fourth quarter. But Utah ended its three-game road swing strong for the impressive win against Paul George & Co.

Utah’s defense was superb in the fourth quarter when it held the Clippers to only 17 points, including just six in the final five minutes.

“Finding ways to win as a team is fun,” Jazz coach Will Hardy said. “For it to be our defense down the stretch … I thought our guys really stuck in there and just competed to the end.”

Markkanen had 27 and 13 rebounds, with Clarkson contributing 20 points, in the previous win over the Lakers. Hardy called that outcome “just another testament to the group, and to doing it as a group.”

Playing cohesively is something the Lakers are struggling to accomplish right now.

On the bright side for Los Angeles, however, is the resurgence of Russell Westbrook. He had 26 points and six assists versus Utah, and 19 points and 10 assists against Cleveland. The Lakers fans even cheered him on with several “M-V-P” chants over the weekend.

Westbrook was concerned about Utah’s quick start Friday. The Jazz shot 60.8 percent in the opening half and took a 75-62 lead into halftime.

“They just started off playing a lot faster than us,” Westbrook said. “(We were a) step slow, and it showed. We tried to pick it up in the second half, but we put ourselves in a bad position early.”

Lakers coach Darvin Ham was critical of his team’s last performance against Utah.

“We took a huge step backward (Friday night),” Ham said. “It’s the first game where I felt like we weren’t there defensively.”

The Lakers fell apart in the second half on Sunday against the Cavaliers, only scoring 36 points in the final two quarters combined after going into the break ahead 64-58.

LeBron James scored 27 points against his old team after posting 17 points and 10 rebounds in the Utah setback.

“We just didn’t come out ready (in the second half),” Westbrook said. “We were playing catch-up.”