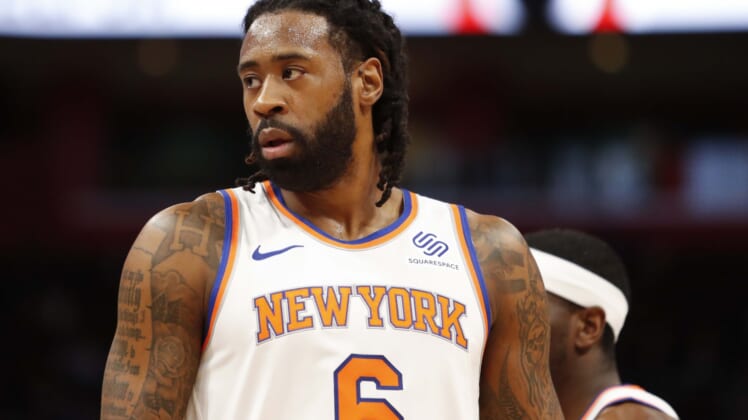 The Los Angeles Lakers still have one roster spot open after making multiple trade deadline deals earlier in the month. The expectation here is that the Lakers will use said roster spot on the veteran buyout market.

Obviously, the name that age to mind first was current free agent Carmelo Anthony. Though, Eric Pincus of Bleacher Report mentions another possibility.

“A better fit would be New York Knicks center DeAndre Jordan, who the Lakers are eyeing before the March 1 playoff-eligibility waiver deadline,” Pincus reported.

Jordan was one of several players acquired by the New York Knicks in the Kristaps Porzingis blockbuster. One of the players New York picked up — Wes Matthews — was already bought out by the team.

At this point, it seems unlikely that Jordan will be bought out. Despite being an impending free agent, New York is seemingly hellbent on keeping the veteran around. Of course, that could change over the next several days.

Whether a certain member of the Knicks wants to admit it or not, the team is in full-blown tank mode. They have lost 31 of their past 34 games and are right in the thick of the race for the No. 1 overall pick — likely Duke’s Zion Williamson.

If New York were to decide to part ways with Jordan, the Lakers would certainly make a lot of sense. They could use some frontcourt help to go with the likes of JaVale McGee and Tyson Chandler.