Lakers outrebounded but manage to knock off T-Wolves 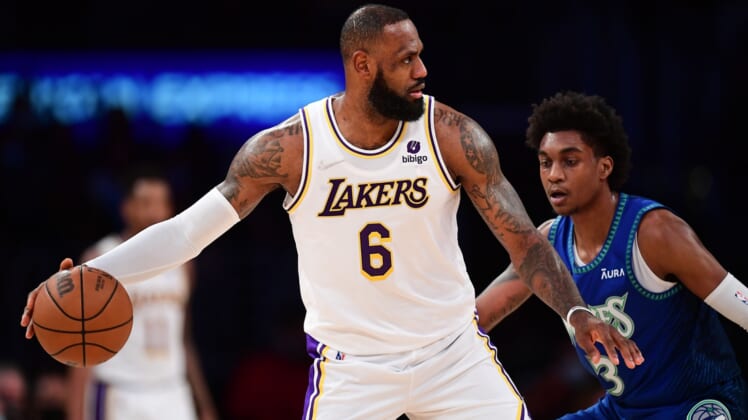 LeBron James scored 26 points and Malik Monk added 22 as the Los Angeles Lakers earned a 108-103 victory over the visiting Minnesota Timberwolves on Sunday despite a significant rebounding disadvantage.

Russell Westbrook had 20 points for the Lakers, but had eight turnovers on a night when Los Angeles had 28 rebounds to 56 for Minnesota. The Lakers defeated the Timberwolves for the first time in three tries this season.

Los Angeles won for just the third time in its last nine games, a slide that started with a 110-92 loss at Minnesota on Dec. 17 when Los Angeles star Anthony Davis injured his knee. He has not played since.

Naz Reid scored a season-high 23 points and had 11 rebounds for the Timberwolves, who lost for the fifth time in their last six games. Reid was held scoreless in the fourth quarter. Minnesota was without two of their three top scorers with Karl-Anthony Towns and D’Angelo Russell in COVID-19 protocol.

Anthony Edwards scored 18 points for the Timberwolves but had eight turnovers. Jaylen Nowell had 17 points as Minnesota lost its fourth-consecutive road game. Minnesota had 20 offensive rebounds to four for the Lakers.

Avery Bradley and Carmelo Anthony each had 14 points for the Lakers, with Anthony scoring nine of those in the fourth quarter. James had seven rebounds and five assists, but was held under 30 points for the first time in eight games.

Malik Beasley scored 16 points for the Wolves, while Patrick Beverley had 12 with nine rebounds.