Lakers look to move on from brutal start to season, host Nuggets 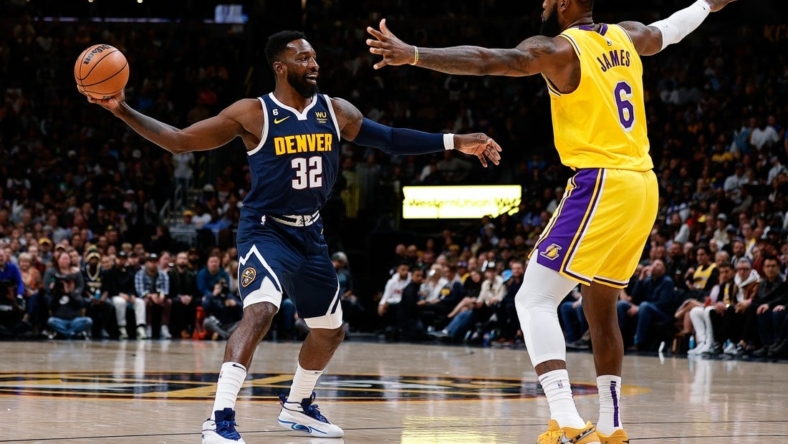 Bones Hyland went off against Utah on Friday night, sinking seven 3-pointers to help the Denver Nuggets beat the Jazz.

That type of shooting is unheard of from the Los Angeles Lakers this season.

The Lakers lost at Minnesota on Friday night and have lost their first five games of the season. It ties the 2014-15 team for the worst start in franchise history. That team finished 21-61 and unless the shooting improves, this year’s squad could struggle to hit 20 wins.

They’ll go for their first Sunday night when they host the Nuggets in a rematch of Wednesday’s game.

Los Angeles played Friday without center Anthony Davis, who woke up that morning with back tightness but is hopeful to return against the Nuggets.

The Lakers will have guard Russell Westbrook available after he missed the 110-99 loss in Denver. Westbrook scored 18 points and grabbed eight rebounds off the bench in the loss to the Timberwolves. It is the first time since early in his rookie year, 2008-09, that he has come off the bench.

The veteran and 2017 NBA MVP talked with head coach Darvin Ham about being a reserve to provide a spark for the second unit.

“From Day 1, I mentioned, I’m a guy that’s willing to do whatever for the team,” Westbrook said Friday night. “I’ll sacrifice whatever it is that needs to be sacrificed, parts of my game that I’ve done for years to accommodate whatever it is that the coach needs me to do and I’ll continue to do that.”

Los Angeles will face a tough challenge against the Nuggets. Michael Porter Jr. didn’t play in Wednesday’s game due to lumbar management but had 22 points and tied DeAndre Jordan with a game-high 13 rebounds in 30 minutes against the Jazz.

Porter’s slick shooting is expected, but if Denver is getting 26 points from Hyland and production from rookie Christian Braun, it will be tough to beat. Hyland, in his second season, has been given an expanded role with the offseason trade of Monte Morris and Will Barton.

Hyland hit a few from far behind the 3-point line when the defense sagged off him on Friday.

“They think, ‘Well, he’s nowhere near the (3-point) line, so he’s not going to shoot this,” Hyland said. “But I practice these shots, night in and night out. And I’m comfortable shooting farther than I am.”

One of Hyland’s 3-pointers came in transition that began with Braun blocking Malik Beasley’s layup. Braun has played his way into a tough-to-break rotation with his overall play and is averaging 18.5 minutes a game.

Those outputs helped Denver overcome a somewhat mediocre performance from two-time MVP Nikola Jokic. He had just 12 points and 10 rebounds and shot just 3-for-10 from the field Friday night, but the Nuggets were in control most of the evening.

Denver could be without guard Kentavious Caldwell-Pope for a second straight game. He is listed as questionable. He sat out Friday night with a sprained left ankle suffered in the win over the Lakers on Wednesday.