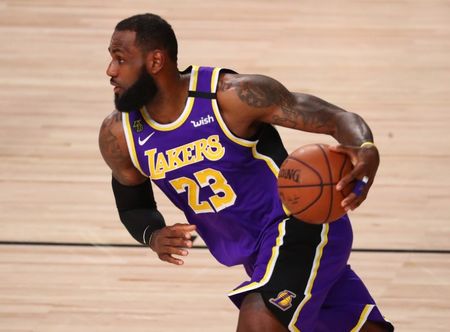 (Reuters) – An unexpected NBA Finals matchup between the LeBron James-led Los Angeles Lakers and Miami Heat begins this week, capping an unprecedented season interrupted by the COVID-19 outbreak before resuming without fans at Disney World in Florida.

This year’s showdown marks the first NBA Finals between two teams who missed the playoffs the previous season and it is the Lakers, powered by three-times champion James and Anthony Davis, who are favored in the best-of-seven games series.

James, who has reached nine of the last 10 NBA Finals, won his first two championships with Miami in 2012 and 2013, picked up a third in 2016 with Cleveland and joined the Lakers in 2018 with the goal of restoring the franchise’s glorious past.

The West’s top-seeded Lakers last appeared in the NBA Finals in 2010 when they picked up the franchise’s 16th championship, one shy of the Boston Celtics’ all-time mark.

The Lakers missed the playoffs last season for the sixth consecutive year as James battled a groin injury but his return to health and the acquisition of Davis in July 2019 put them back on the path toward the NBA’s elite.

Awaiting the Lakers in Game One on Wednesday will be the East’s fifth-seeded Heat, a battle-tested team led by Jimmy Butler and Bam Adebayo and whose surprising run to the Finals has been no fluke.

The Heat swept aside fourth-seed Indiana in the first round, upset league Most Valuable Player Giannis Antetokounmpo’s top-seeded Milwaukee team in five games in the East semi-final and then dumped third-seed Boston in six games.

For their part, the Heat have embraced the underdog role and feel they have yet to play their best basketball.

“We have to be near perfect to beat the Lakers. We’re capable of it,” said former first-round draft pick Butler. “But we’re not worried about no five-seed or one-seed. We’re worried about us and being the best Miami Heat team that we can be.”