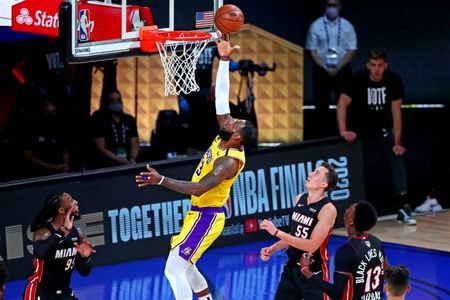 (Reuters) – LeBron James overcame a sluggish start and Anthony Davis made a key three-pointer and block late on as the Los Angeles Lakers beat the Miami Heat 102-96 on Tuesday to take a 3-1 lead in the best-of-seven NBA Finals.

Coming off a win in their last meeting, the Heat played with confidence early on as Jimmy Butler went 5-5 from the field, including a jump shot at the buzzer that cut the Lakers’ lead to 27-22 at the end of the first quarter.

The Miami defense frustrated the Lakers in a back-and-forth second quarter and the Heat went into the break down two points after rookie Tyler Herro’s put-back jumper went in just before halftime.

James scored just eight points and committed five turnovers in the first half but was much better in the second, finishing with 28 points including a driving layup where he was fouled after the Heat tied the game 83-83 with 6:22 left to play.

With less than a minute left, Davis hit a long three-pointer to push the advantage to nine and blocked a Butler layup attempt to seal the win and put the Lakers one victory away from their 17th championship and first since 2010.

The Lakers got important contributions from the supporting cast including 15 points from Kentavious Caldwell-Pope and five assists and seven rebounds from Rajon Rondo.

“It felt like a Finals game. It felt like both teams were desperate, understanding the situation they had both put themselves in,” James said.

“Trying to get every extra possession, execute offensively, trying not to make mistakes defensively – that’s what it was all about. And we needed every second from our bench and our starters to get this win.”

James said he was already thinking about Friday’s Game Five.

“We understand what’s at stake. The job is not done,” he added. “I look forward to the next match.”