Lakers’ Frank Vogel had doubts about club before season 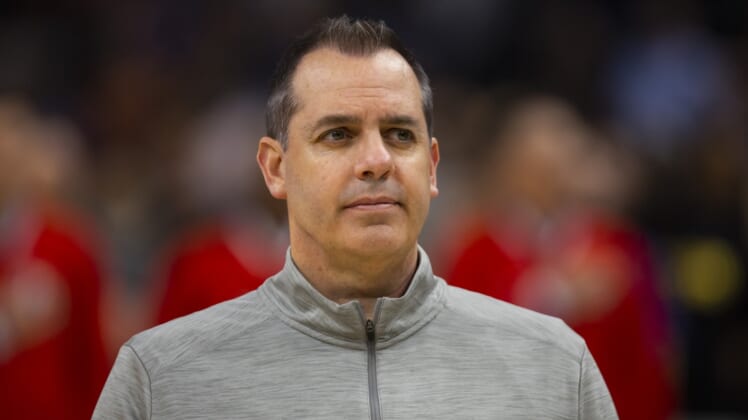 The Frank Vogel watch is officially on now that the Los Angeles Lakers have been eliminated from the playoff picture.

The Los Angeles coach is under contract for one more season but doesn’t sound like someone expecting to return for a fourth campaign guiding the Lakers.

“We’ll cross that bridge when we get there,” Vogel said. “It’s been a win-now job for each of the three years I’ve been here.”

Vogel guided the Lakers to the 2019-20 NBA crown and has a 125-97 record. But things imploded badly this season with the Lakers sitting at 31-48 after Tuesday night’s 121-110 loss to the Phoenix Suns, and experts are lining up to rank the team as one of the most disappointing squads in NBA history.

LeBron James and Anthony Davis were hounded by injuries and the offseason acquisition of Russell Westbrook didn’t pan out. Numerous reports have stated that DeMar DeRozan badly wanted to play for his hometown team but James preferred adding Westbrook.

James’ general manager skills aside, Vogel said he had a bad feeling about the team from the start. He told The Athletic he had those heavy sentiments before Los Angeles even played a regular-season game.

“We were getting killed in the preseason,” Vogel said of the 0-6 record. “And it was like, ‘Well, it’s preseason.’ But it’s still the early look at those guys.”

The early look never got much better and the Lakers will lose their most games this season since that rough four-season stretch from 2013-17 in which club dropped between 55 and 65 games each season.

Los Angeles was 21-19 at the 40-game mark but a three-game losing streak followed and Vogel was nearly fired after a 133-96 loss at Denver.

“It’s not easy to shut it out,” Vogel told the Athletic of the speculation. “It’s not fun to have those reports hanging over your head or seeing it everywhere you look, especially so early in the season (and) after what we’ve been able to accomplish here. But to me, that pressure of expectation has been here since the day I signed on.”

Vogel still thought a turnaround could occur. But with Davis ailing and Westbrook still not proving to be a good fit, things disintegrated and the Lakers were never again above .500.

The loss to Phoenix was Los Angeles’ seventh straight and 20th in 25 games. With their season on the line, the Lakers trailed by as many as 26 points

“We were eliminated tonight and I can say it’s not been due to a lack of effort,” Vogel told reporters afterward. “We have all put in the work. Our guys stayed fighting right until the end. … We brought integrity to the process. We just fell short through a disjointed season.”

Vogel likely gets to stand on the Lakers’ sideline for just three more games. Speculation has names like Utah’s Quin Snyder and Philadelphia’s Doc Rivers as possible candidates for the job.

The Lakers finish the season this way: at the Golden State Warriors on Thursday, hosting Oklahoma City Thunder on Friday and at Denver Nuggets on Sunday.