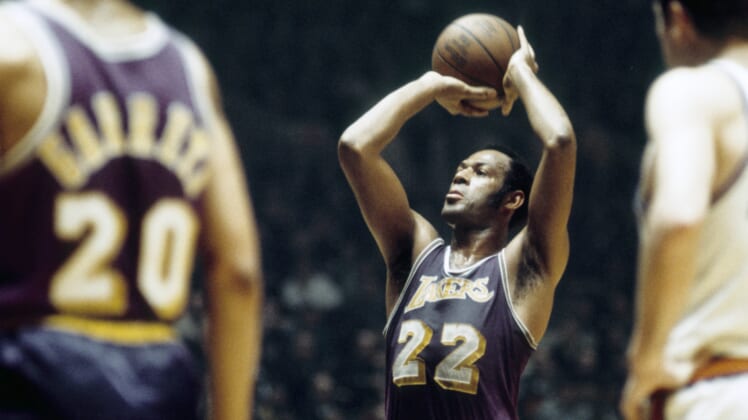 The entire NBA world is reeling following news on Monday that all-time great Los Angeles Lakers forward and Hall of Famer Elgin Baylor has passed away from natural causes at the age of 86.

The Lakers released a statement after news of Baylor’s passing became public record.

“Elgin was the superstar of his era — his many accolades speak to that,” Lakers president Jeanie Buss said in a statement. “He was one of the few Lakers players whose career spanned from Minnesota to Los Angeles. But more importantly, he was a man of great integrity, even serving his country as a U.S. Army reservist.”

“Elgin was the love of my life and my best friend,” Elaine said in a statement. “And like everyone else, I was in awe of his immense courage, dignity and time he gave to all fans. At this time we ask that I and our family be allowed to mourn his passing in privacy.”

The No. 1 overall pick of the then-Minneapolis Lakers back in 1958, Elgin Baylor morphed into one of the greatest players in franchise history. He earned 11 All-Star Game appearances and was named All-NBA player 10 different times.

While a tremendous talent initially coming out of Seattle University, Baylor took his game to the next level. From 1960-63, he averaged a resounding 35.3 points and 17.3 rebounds for the Lakers. Those are some of the most eye-opening numbers in franchise history.

For the Lakers, this is yet another bitter pill for the historic franchise to swallow. It was just 14 months ago that fellow all-time great Kobe Bryant and his daughter were among those killed in a tragic Southern California helicopter accident. Elgin Baylor previously spoke on Bryant’s passing and legacy within the Lakers’ organization.

“At first I didn’t want to believe it,” Baylor said back in February of 2020. “It was a shock. I felt like I was stabbed in the heart. He was so young. He was a family man. He was doing great things in the community. I just couldn’t believe it.”

As one of the anchors of the Lakers’ franchise following their move from Minneapolis to Los Angeles in 1960, Baylor remained an active member of the Southern California community up until his death. That’s one of the reasons it has hit those close to the basketball world pretty hard.