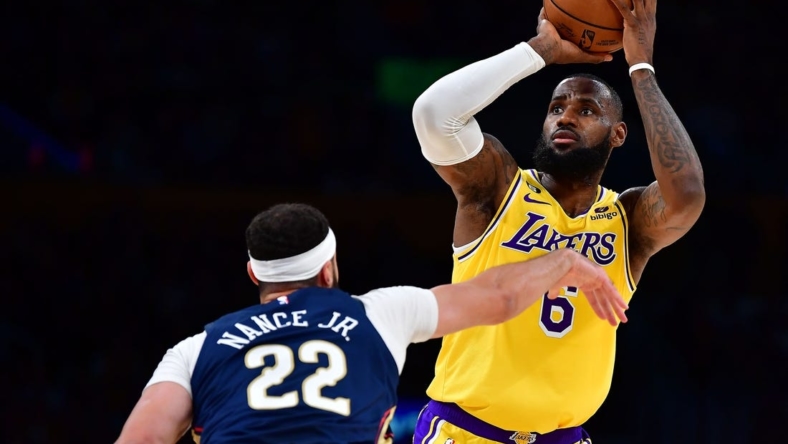 Lonnie Walker IV scored 28 points, LeBron James and Anthony Davis added 20 each and the Los Angeles Lakers pulled out a 120-117 overtime victory over the New Orleans Pelicans on Wednesday to win consecutive games after an 0-5 start to the season.

Davis added 16 rebounds while James had 10 boards and eight assists as the Lakers finished off the victory despite blowing a 16-point, third-quarter lead. Matt Ryan hit a buzzer-beating 3-pointer for the Lakers to send the game into overtime in just his sixth career contest.

Zion Williamson scored 27 points for the Pelicans to rebound from a slow start when he had just six points at the half. CJ McCollum had 22 points and eight assists for New Orleans, which finished 1-2 on its road trip, with the win coming in Los Angeles against the Clippers on Monday.

McCollum missed a 3-point attempt that would have tied the game with 6.7 seconds remaining in the extra period.

Russell Westbrook had 13 points, nine assists and seven rebounds off the bench for the Lakers.

With Los Angeles trailing 111-108 in regulation, Walker had a chance to tie the game, but his 3-point attempt missed the mark with 2.8 seconds remaining. New Orleans’ Dyson Daniels was unable to put the game away when he missed a pair of free throws with 1.6 seconds left. Ryan, who finished with a career-high 11 points, then tied it.

The Lakers led 60-44 less than a minute into the second half before the Pelicans charged back into the game. New Orleans used a 15-0 run late in the third to take a brief lead at 77-76. The Pelicans outscored the Lakers 35-26 in the third quarter and trailed 82-79 heading to the fourth.

The Pelicans were without starters Brandon Ingram (concussion protocol) and Herbert Jones (knee), each for the fourth consecutive game.