Lakers aim to avoid another meltdown vs. Thunder 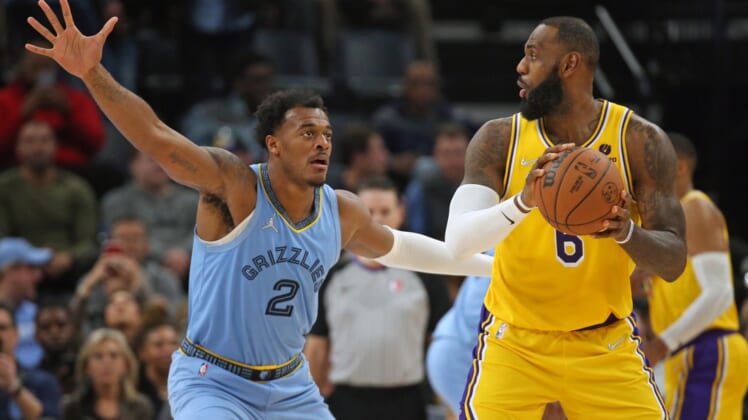 The Los Angeles Lakers and the Oklahoma City Thunder came into the season with wildly different expectations.

The Lakers had — and still have, despite a slow start — title aspirations, while the Thunder are in the second year of a near-complete rebuild.

Both times they’ve played this season, Los Angeles has opened up a big lead, seemingly having the game well in hand, before Oklahoma City launched a big comeback.

The Thunder came back to win both times, the first a 123-115 win at home on Oct. 27 as they tied a franchise record by coming back from 26 points down.

On Friday, the teams will play in Oklahoma City in the third of four meetings.

It hasn’t been just the Thunder who have given the Lakers fits this season after Los Angeles built a lead.

The Lakers have lost nine games after being ahead by double figures. In a 108-95 loss at Memphis on Thursday, they led by nine in the first quarter before letting the lead slip away.

“There was just too much casualness to our approach,” Lakers coach Frank Vogel said.

It wasn’t something that snuck up on Vogel.

“I wouldn’t say I’m surprised,” he said. “I’ve seen it with our group this year.”

The Lakers tied a season high with 22 turnovers Thursday, leading to 27 points on the other end.

The Thunder enter Friday’s game, the start of a four-game homestand, having won back-to-back games — both on the road.

A big part of Oklahoma City’s recent success has been Darius Bazley’s play.

While Bazley is putting up the worst shooting numbers of his three-year career, his defense has kept him in the lineup.

In wins at Detroit and Toronto, Bazley was even more of a difference maker on the defensive end.

Just before this recent two-game stretch, Oklahoma City had dropped eight in a row. But most of the games were close. Other than the NBA-record 73-point loss at Memphis in the final game of that losing streak, the six others were decided by an average of seven points per game.

“We’re a young team, and one of the things I think our team’s learning is the length of the game — how long the game is and how many ups and downs there are,” Daigneault said. “I think that’s something that, as you get older and more experienced and you get more games under your belt, you start to understand.”