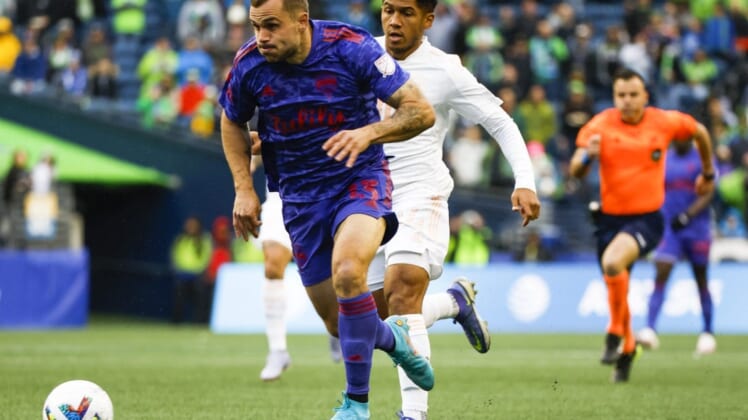 With the international break complete, Los Angeles FC look to extend their lead atop the MLS standings when they visit the Seattle Sounders on Saturday.

LAFC (9-3-2, 29 points) have been the league’s top team through the first portion of the schedule, enjoying success both at home and on the road. After collecting only five away wins over the 2020 and 2021 seasons combined, Los Angeles is already 4-2-0 in road games this season.

It has been three weeks since Los Angeles FC’s last game, a 3-2 home win over the San Jose Earthquakes on May 28. Rather than worry about interrupted momentum, however, LAFC coach Steve Cherundolo welcomed the chance for his team to “kind of push the reset button” and get some needed rest.

“We came off a really, really congested schedule so the break came at the right time for us,” Cherundolo said, noting that Los Angeles played eight games (six in MLS, two in US Open Cup) from May 1 to 28.

The Sounders (6-6-1, 19 points) already returned to MLS action on Tuesday, earning a lopsided 4-0 win over the Vancouver Whitecaps. Raul Ruidiaz recorded a brace, yet also picked up a minor hamstring injury that will sideline him for at least the next two games.

Ruidiaz leads Seattle with five goals this season, but the Sounders have some roster reinforcements coming. Yeimar Gomez Andrade could be available after missing the Vancouver game with his own hamstring injury, and Nouhou should be ready for action after returning earlier in the week from international duty. To boot, Albert Rusnak, Cristian Roldan and Jordan Morris returned from international duty in the past few days.

Seattle also entered the break on a roll. The team is 4-1-0 over its last five contests, which includes wins in each of its last three home games.

Topping LAFC would be the biggest result yet, and it would continue what Morris described as “a little bit of a rivalry” between the two sides. The Sounders eliminated Los Angeles FC from the MLS Cup Playoffs in both 2019 and 2020.

After a rare three-game losing streak (their longest in three years) the Sounders were near the bottom of the Western Conference standings, but their recent stretch has boosted them to seventh place.

“We’re not where we want to be yet,” Morris said. “Whenever you play teams above you (in the standings), it’s an important game to get that swing.”