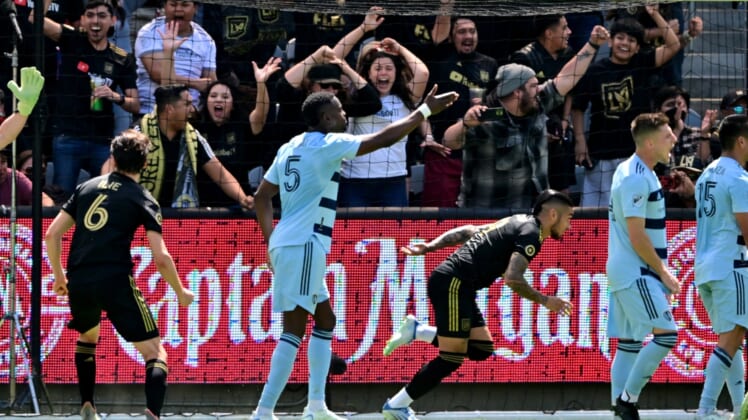 Second-half goals from Ismael Tajouri-Shradi and Jose Cifuentes helped host Los Angeles FC come from behind for a 3-1 win over Sporting Kansas City on Sunday.

LAFC’s Diego Palacios atoned for an own goal early in the match with assists on goals for Tajouri-Shradi and Cristian Arango. Palacios sent a long ball to Tajouri-Shradi, whose impressive strike curled into the net in the 70th minute for a 2-1 LAFC lead.

Cifuentes rolled a shot through traffic and past Sporting KC goalkeeper Tim Melia in the 78th minute, padding LAFC’s lead and sending the jubilant supporters behind the net into a drink-splashing frenzy on a sunny day in South Los Angeles.

LAFC (5-1-1, 16 points), which is in first place in the Western Conference, almost went up 4-1, but Danny Musovski’s header went low and just left of the net in the 88th minute.

Arango’s goal in the 44th minute, his second in as many games, came off a free kick outside the box that hit a goalpost and caromed back out. The ball was sent back in and off the head of Mamadou Fall toward the middle, where Arango headed in the deflection to tie the game.

In the 38th minute, Sporting KC took a 1-0 lead when Johnny Russell gathered in a turnover in the LAFC attacking area and dribbled up the right flank all the way in on goal. His shot from a sharp angle went off Palacios and past LAFC goalie Maxime Crepeau.