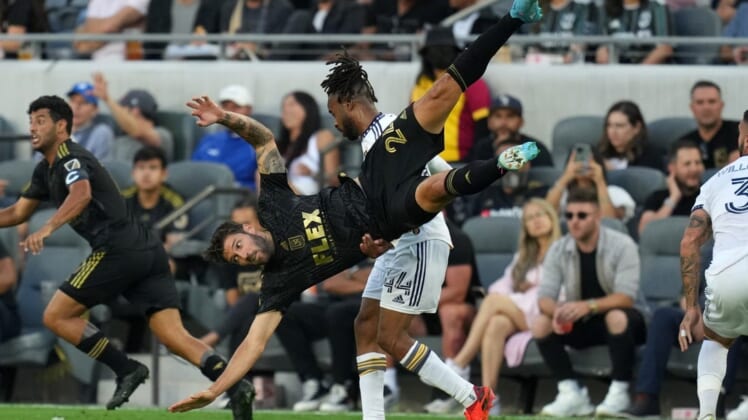 With newly signed Gareth Bale watching from the stands, his new team, Los Angeles FC, won a 3-2 thriller at home over the rival Los Angeles Galaxy before a raucous crowd on Friday.

The Galaxy (8-7-3, 27 points) got second-half goals from Samuel Grandsir and Rayan Raveloson. The latter pulled the visitors with in a goal in the 81st minute, but LAFC held on for the three points.

The Galaxy have been the better team in the history of the rivalry known as “El Trafico,” having posted seven wins and three draws in the prior 15 minutes. But they were on their heels in the first 16 minutes of the match as Arango had a couple of close chances. Kellyn Acosta then sent in a 17th-minute set piece that Cifuentes headed into the net for LAFC’s early lead.

The Galaxy got their first good chance to tie on a Dejan Joveljic breakaway, but LAFC goalkeeper Maxime Crepeau got a hand on the shot and knocked it wide of the net in the 20th minute.

The visitors were the more aggressive team from that point into the second half, and in the 55th minute, Grandsir’s low bouncer got through the box and past Crepeau after a Raveloson pass from out wide. The goal tied the match 1-1.

LAFC answered with two goals in about two minutes. Carlos Vela whipped in a ball toward the box that Cifuentes met with his head for a 2-1 lead in the 70th minute. Then Arango scored from distance, Vela again providing the assist, and got a lift onto a teammate’s shoulders in celebration.

The Galaxy didn’t give up, but couldn’t find a tying goal after Raveloson’s goal.

With LAFC’s win, the Galaxy’s five-match unbeaten streak (3-0-2) against the newer team to the Los Angeles area came to an end.