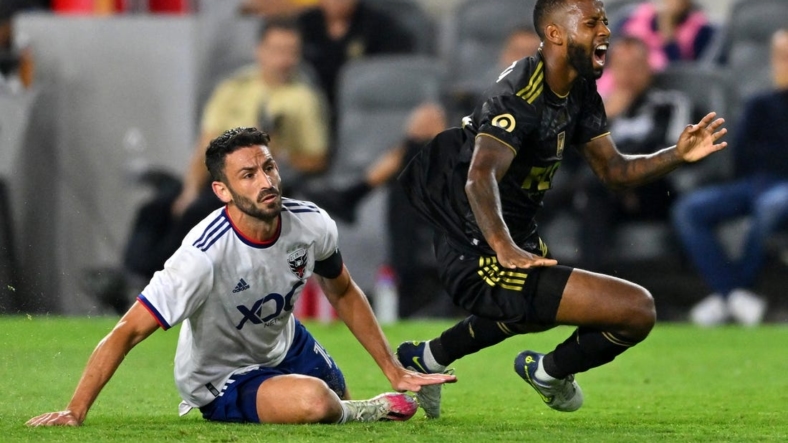 Los Angeles FC once again looks to emerge from their slump when they host the Houston Dynamo on Sunday night.

Los Angeles FC are just 1-4-1 over their past six matches, including a 2-1 road loss against the lowly Dynamo on Aug. 31.

Still, LAFC (19-8-4, 61 points) can clinch the Western Conference crown with a victory on Sunday or a loss or tie from second-place Austin FC on Saturday.

It doesn’t hurt that Sunday’s match is at Banc of California Stadium, as LAFC have won eight consecutive home matches and are 12-1-2 overall at home.

LAFC are coming off a 1-1 road tie against Minnesota United on Tuesday. Carolos Vela scored the equalizer with a shot from outside the box in the 64th minute.

The Dynamo (9-16-6, 33 points) are in 13th place in the West and have already been eliminated from the playoffs.

But Houston has had a renewed attitude in two matches since interim coach Kenny Bundy took over for fired Paulo Nagamura. The Dynamo played Sporting Kansas City to a scoreless tie in Bundy’s debut and followed up with a 3-1 home win over the New England Revolution on Tuesday.

Fafa Picault had two goals and Darwin Quintero scored the other in the impressive victory.

Leading scorer Sebastian Ferreira (10 goals) and Griffin Dorsey had the goals in the recent stunner over LAFC. Defender Adam Lundqvist said he is looking forward to the rematch.

“We’re excited to get a good result in a very fun place to play in L.A.,” Lundqvist said. “I think we showed a lot of character. It was a very tough game. They had a lot of good chances. We defended very well and some guys came up big and played an incredible game.”

The odds of another upset aren’t particularly good. The Dynamo are 3-27-10 in their past 40 road matches.