LAFC erupt for 5 goals in second half, rout Charlotte FC 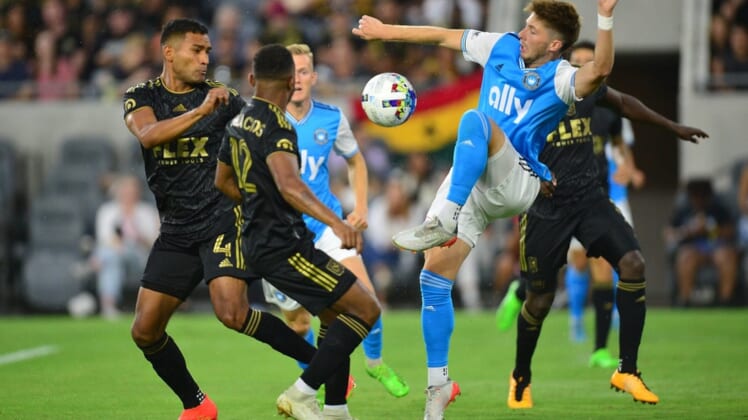 Host Los Angeles FC exploded for five second-half goals and rolled to a 5-0 win over expansion side Charlotte FC on Saturday night.

Jesus Murillo, Jose Cifuentes, Carlos Vela and Cristian Arango tallied goals in a 28-minute span, leading Western Conference-leading LAFC to another win in what is on pace to be the team’s best season in its fifth season of existence.

Murillo’s goal in the 49th minute broke a scoreless tie, and LAFC kept up the attack with Cifuentes scoring off a corner kick in the 59th, Vela off a long ball to him after he slipped ahead of Charlotte’s defense in the 73rd minute, and Arango three minutes later to complete a series of pinpoint passes between teammates.

Vela and Cifuentes added an assist each.

LAFC was close twice in the first half, a sign of things to come. Brian Rodriguez controlled a pass from Vela and had a good opportunity, but he shot high and wide with his left foot at the 17-minute mark.

Moments before, Charlotte’s Yordy Reyna had his right-footed attempt from distance saved by LAFC’s Maxime Crepeau in a corner of the net.

In the 34th minute, LAFC’s Diego Palacios fired a shot from close range, but Charlotte goalkeeper Kristijan Kahlina made a one-handed save.

LAFC didn’t even activate its two top transfer signings, Gareth Bale and Giorgio Chiellini, for the match. It was the team’s sixth win without a loss against a Major League Soccer expansion team.