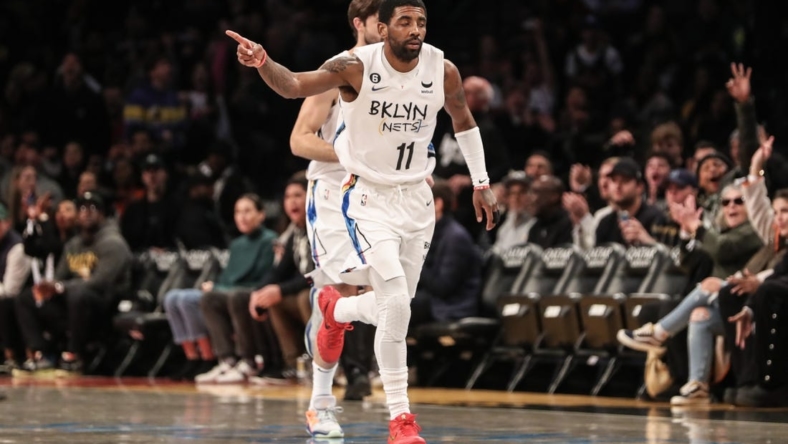 Kevin Durant scored 20 of his 26 points in the second half and the host Brooklyn Nets pulled away in the fourth quarter for a 127-115 victory over the Memphis Grizzlies on Sunday night in Kyrie Irving’s return from a team-imposed suspension.

Durant has reached 25 points in all 17 games this season and is the first to do since Rick Barry scored at least 25 in the first 25 games for the 1967-68 San Francisco Warriors. Durant made 9 of 16 shots overall and scored 14 points in the third to help the Nets erase a five-point halftime deficit.

Ben Simmons scored a season-high 22 on 11 of 13 from the field as the Nets shot a blistering 60.2 percent. Coming off the bench, Yuta Watanabe added 12 of his 16 in the fourth quarter while Irving finished with 14 after sitting out the past eight games.

Irving was the focal point of controversy for posting a link to an anti-Semitic film on Oct. 27 and was handed at least a five-game suspension when he did not apologize following a contentious media session at practice on Nov. 3.

When the Nets suspended him, they stipulated Irving must complete several steps, including meeting with commissioner Adam Silver. They met last week, and Silver said he did not think Irving held anti-Semitic beliefs and the Nets went 5-3 without Irving.

The Grizzlies lost for the third time in four games and struggled without Ja Morant (sprained left ankle), who was injured in the fourth quarter Friday.

Dillon Brooks led all scorers with 31 points but shot 13 of 30 as the Grizzlies saw their seven-game winning streak over Brooklyn halted. John Konchar added 16 while Steven Adams contributed 15 and 10 rebounds as the Grizzlies shot 43.4 percent.

Memphis outscored Brooklyn 24-12 over the final 7:14 of the second and took a 62-57 lead on a 3-pointer by Konchar with 2.1 seconds left but quickly lost the lead early in the third.

Brooklyn took a 96-93 lead into the fourth after Durant found Watanabe for a layup right before the horn. Watanabe’s 3 pushed the lead to 101-93 less than a minute into the fourth and two more 3s by Watanabe in a span of 37 seconds a 112-98 edge with 7:15 remaining.