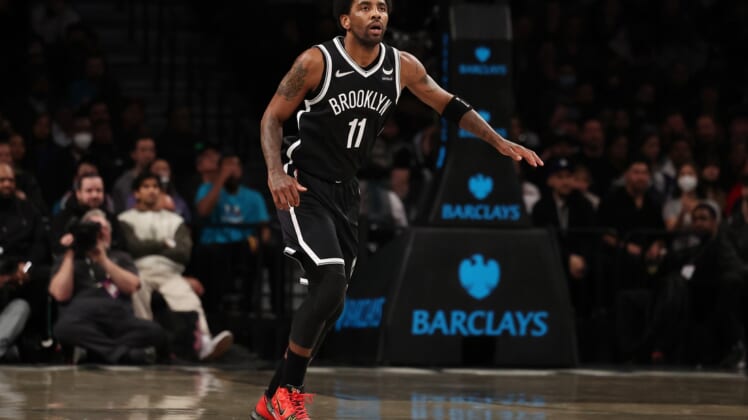 Kyrie Irving’s first home game of the season ultimately became a disappointing ending for the Brooklyn Nets, and the defeat made their chances at avoiding a play-in game more difficult.

Irving struggled to find his rhythm throughout his home debut Sunday, and the Nets hope their star guard can get into a better flow Tuesday night when they host the Detroit Pistons.

Irving’s appearance on the Nets’ home court came after New York City’s private-employer COVID-19 vaccine mandate for athletes and performers was lifted. Until Sunday, his last contest at home was Game 2 of the Eastern Conference semifinals against the Milwaukee Bucks on June 7.

The loss came after a late-night flight following Saturday’s 110-95 victory at Miami.

“Not the result we wanted; I didn’t shoot as well as I wanted,” Irving said. “Basically, none of the things I had hoped (would) go well tonight. Just didn’t happen, and that’s just the flow of basketball.”

Irving’s biggest moments occurred when he scored eight straight Brooklyn points to help the Nets rally from nine points down in the fourth quarter. After his two free throws gave the Nets a 106-105 lead with 3:36 remaining, the Nets were outscored 14-4.

Heading into play Monday, the Nets and Hornets have identical records, tied for eighth place in the Eastern Conference, but Charlotte owns the head-to-head tiebreaker. The Nets also entered 2 1/2 games behind the seventh-place Cleveland Cavaliers and 3 1/2 games behind the sixth-place Toronto Raptors.

“We know where we are in the standings,” Irving said. “And we also know how much talent we have in this locker room and what we’re capable of doing.”

Detroit (20-55) heads to Brooklyn with eight losses in 10 games since putting together a three-game winning streak March 3-7. Detroit’s winning streak saw them win by a combined 10 points, and seven of the team’s losses in the current skid are by single digits.

“We keep digging ourselves into a hole early in games, and then we have to scratch and claw all night just to give ourselves a chance,” Detroit coach Dwane Casey said. “I liked the way we played in the last three quarters — we played decent defense and we hit some shots — but we can’t play the first quarter like that.”

Marvin Bagley III led the Pistons with a season-high 27 points on Sunday in his sixth start since joining Detroit in a February trade and made the start because Jerami Grant sat out with a strained left calf that could keep him out again Tuesday.