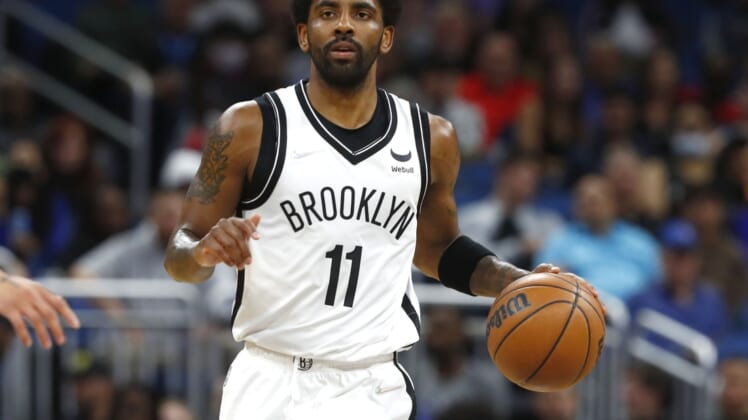 Kyrie Irving scored 41 of his career-high 60 points during Brooklyn’s record-setting first half, leading the Nets to a 150-108 victory over the host Orlando Magic on Tuesday night for their fourth consecutive win.

Irving’s first-ever 60-point game, breaking his previous career-high of 57 against San Antonio in 2015, featured 20 made field goals on 31 attempts. He also went 8-for-12 from beyond the arc and 12-for-13 at the foul line en route to his sixth career performance with 50-plus points, which included scoring 50 against Charlotte on March 8.

Kevin Durant, coming off a 53-point performance against the New York Knicks on Sunday, had 19 points and seven assists in the Nets’ wire-to-wire victory. Irving’s final three points came on a triple off the left wing with 8:32 left, sending him to the bench for the remainder of the game, while Brooklyn put seven total players in double figures.

Irving exploded for 25 points in the second quarter as Brooklyn extended a 48-30 lead. The 41 points marked the most scored in a half this season in the NBA, besting Karl-Anthony Towns’ mark of 36 recorded on Monday against San Antonio, as Irving finished 14 of 19 from the field, 6 of 7 from 3-point range and a perfect 7 of 7 at the free-throw line.

Irving’s free throw at the 11:22 mark of the third quarter gave him 42 points, the most ever scored by a Nets player against Orlando. Kendall Gill held the previous mark of 41 set in 1997.

The 60 points was also just four shy of Michael Jordan’s all-time record against Orlando, which happened in 1993.

The Nets, who were fined $50,000 this week as an organization for allowing Irving to enter the locker room at the Barclays Center during Sunday’s game against the New York Knicks in violation of New York City law and health and safety protocols, led 116-89 after three quarters.