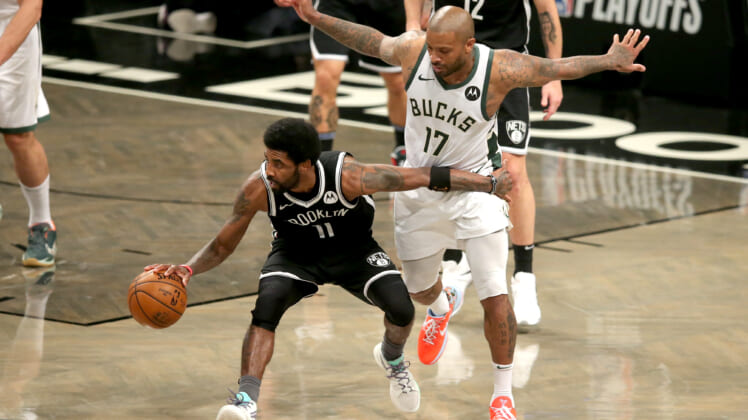 After sitting out the first 35 games of the season, Brooklyn Nets guard Kyrie Irving is on the floor for Wednesday night’s outing against the Pacers in Indiana.

Irving, 29, has been absent throughout the first half of the regular season after refusing to get the COVID-19 vaccine.

Local New York City mandates prevent unvaccinated individuals from attending large-scale indoor events, including basketball games. For their part, the Nets opted to keep Irving away from the team rather than simply play road games.

That’s until a COVID-19 outbreak shook the Nets’ roster and left them down as many as 10 players. Enter into the equation the return of Kyrie Irving.

Ahead of Wednesday’s game against a struggling Pacers squad on the road, it was announced that Irving was in fact in the starting five. He joins Kevin Durant, James Harden, David Duke Jr. and Nic Claxton in the lineup.

What to expect from Kyrie Irving?

It stands to reason that the NBA champion will be limited as he makes his first appearance since last year’s NBA Playoffs. Look for him to play under 30 minutes per over the first few games of his return.

Obviously, the seven-time All-Star will not take part in home games at the Barclays Center until he either decides to get vaccinated or New York City changes its mandates under new mayor Eric Adams. Realistically, this could limit Irving to 24 games on the season following Wednesday night’s outing.

Irving’s return will be a boon for a Nets team that enters Wednesday’s game with a 23-12 record and having lost three consecutive games. It was just this past Monday that Nets head coach Steve Nash benched his entire starting five in the fourth quarter of a blowout home defeat at the hands of the Memphis Grizzlies.