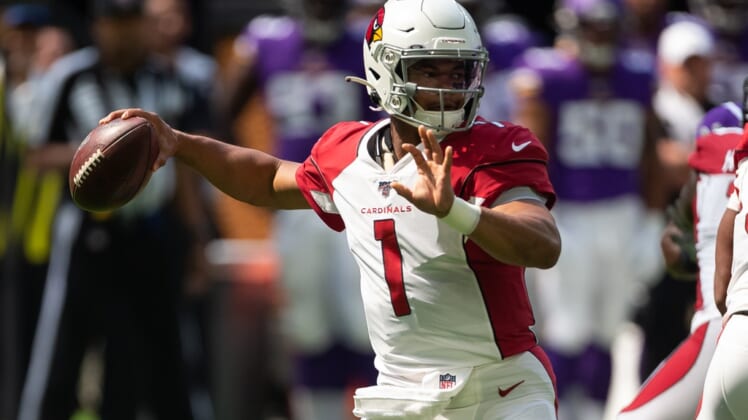 Coming off a rough preseason outing against Oakland in Week 2, Kyler Murray had many critics. Against Minnesota in Week 3, the Arizona Cardinal rookie responded with a sharp performance that showed off his elite NFL arm.

It wasn’t all sunshine and roses for the No. 1 overall pick, who got off to a rough start. But he came alive on the second drive of the game for Arizona’s offense, ripping a sweet 33-yard completion to Damiere Byrd that led to a field goal.

Murray once more showed off his live arm in the second quarter with a laser-beam throw to the right side. Slinging it in between two Vikings defenders, he hit KeeSean Johnson in stride for another big gain.

Playing most of the first half, Murray completed 14-of-21 passes for 137 yards, adding nine yards on four scrambles. He didn’t take any sacks, mostly took what the defense gave him, and while he still looked rough a few times, Murray had a very strong outing overall.

The best part is that Minnesota had most of its starting defense on the field for much of the first quarter, and that unit is among the best the league has to offer.

Murray is going to have his struggles as a rookie. That’s a fact. Yet given his arm talent, accuracy and mastery of Kliff Kingsbury’s spread offense, it’s safe to assume he’ll also make plenty of positive plays in his first year as a pro.