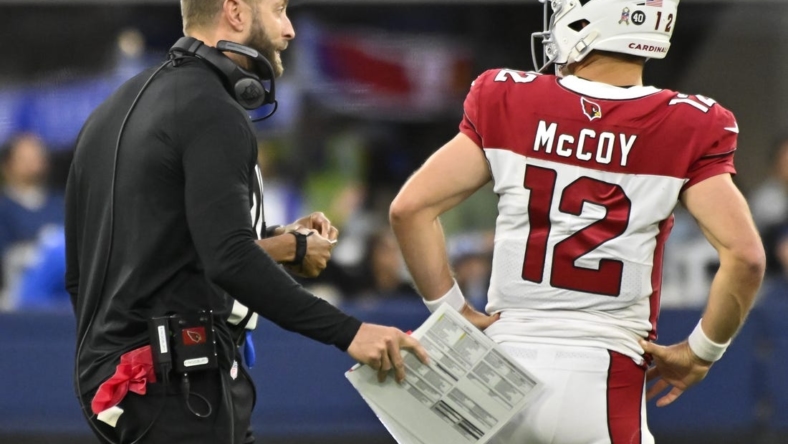 Murray missed Sunday’s win over the Los Angeles Rams after testing out his hamstring in pregame warmups.

Colt McCoy earned the start, but he, too, left the game with a leg injury. Trace McSorley came on to close out the 27-17 win for the Cardinals.

The updates come the same day the team reportedly released backup running back Eno Benjamin and amid a report that starting tight end Zach Ertz (leg) is out for the rest of the season.

Kingsbury said the team wants Murray to be able to go full bore on the field before bringing him back. However, McCoy’s leg was “a little better” Monday, making him a question mark heading into this week’s prime time contest against division rival San Francisco this week.

McCoy threw for 238 yards and a touchdown against the Rams without a turnover.

Benjamin, 23, started three games earlier this season when James Conner was injured. However, he played just one offensive snap against the Rams.

“it was time to give him (James Conner) the starting running back reps,” Kingsbury said Monday.

Benjamin rushed for 299 yards and two TDs in 10 games this season. Benjamin was a seventh-round draft pick by the Cards in the 2020 draft.

Kingsbury didn’t provide an update on tight end Zach Ertz, who was carted off Sunday after sustaining the leg injury. However, NFL Network reported Ertz is done for the rest of the season with a knee injury.