Kyler Murray and the Arizona Cardinals are handing it to the Tennessee Titans in their season opener on Sunday. It’s somewhat surprising given that Tennessee is coming off consecutive playoff appearances and is eyeing a title. That’s especially true given that the game is being played in Nashville.

With his Cardinals up 24-13 in the third quarter, Murray continued his all-around electric play in Week 1. That included connecting with Christian Kirk on an absolutely absurd 26-yard touchdown to put the Cardinals up by three scores.

Just watch that play. Kyler Murray threw off his back foot and dropped a dime to Kirk behind the coverage of rookie defensive back Elijah Molden.

Not to be outdone, that was also a tremendous catch by Kirk over his head. Great job tracking the ball.

As for Murray, he completed 19 of his first 30 passes for 269 yards with three touchdowns against one interception. This is a huge season for both the former No. 1 pick and head coach Kliff Kingsbury. At the very least, the Cardinals look good to start. 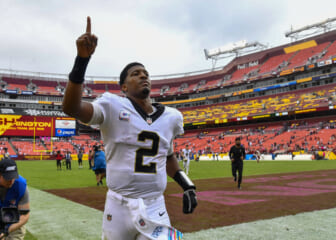