The Arizona Cardinals and quarterback Kyler Murray have gone through a lot this offseason. Despite all the drama and headlines, the two sides are expected to come out of it with a new contract that makes everyone happy.

Murray, the No.1 pick in the 2019 NFL Draft, is taking a very different approach than Lamar Jackson. The face of the Cardinals’ franchise wants an extension now, even if it means ruffling a few feathers in the process and creating some offseason headaches for the front office. Of course, both sides likely share blame for what transpired this spring.

All of the turmoil started in early February when the 24-year-old quarterback wiped all references to the Cardinals off his social media. Teammate Christian Kirk poured fuel on the fire of NFL trade rumors and Arizona’s front office added to the drama with leaked reports calling Murray ‘self-centered and immature.’

Related: What Kyler Murray can accomplish in 2022

Cooler heads prevailed, for a few weeks. The two sides were on the same page shortly before Murray’s agent released a lengthy letter asking for a new contract. Everything quieted down around the 2022 NFL Draft and things keep improving between the two sides.

With Murray now training with his teammates and spending time with coaches at mandatory minicamp, a contract extension looks increasingly likely.

On the Yahoo Sports’ You Pod to Win the Game podcast, NFL insider Charles Robinson explained why he believes the Cardinals sign Murray to a long-term deal this summer.

While some might be hesitant about making Murray one of the highest paid NFL players, Arizona doesn’t have much of a choice. It experienced quarterback purgatory in the years before Murray and also saw the bust rate on some first-round passers. At the very least, Murray can take the Cardinals to the playoffs and he offers MVP upside if he stays healthy.

As for what it will cost the Cardinals to sign Murray, Robinson expects the average annual value will surpass $40 million per season. It’s the going rate for the best NFL quarterbacks and Murray has shown enough to warrant that type of deal. 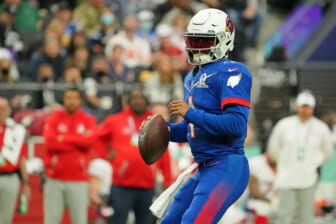 Once the deal is signed, the Cardinals can move forward with the confidence that comes from having a franchise quarterback who is happy and signed to a long-term contract.