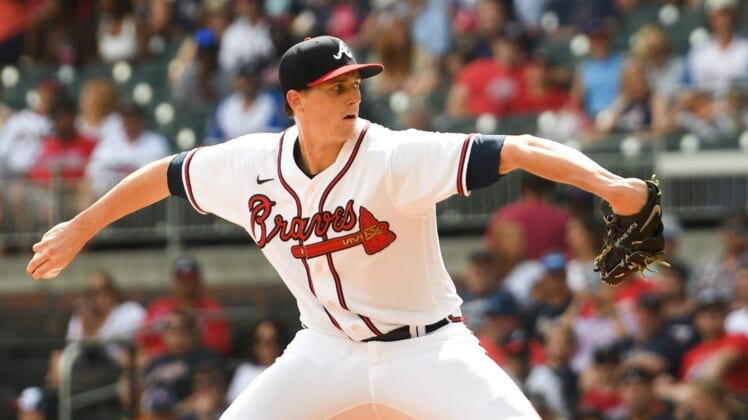 Atlanta will send right-hander Kyle Wright after his 12th win on Saturday night when the Braves host the Los Angeles Angels in the second game of a three-game series.

The Braves won the series opener 8-1 on Friday, have won eight of their past 11 and have pulled to within 1 1/2 games of the first-place New York Mets in the National League East. The Angels have lost four straight and have dropped nine of their past 10.

Wright will make his 19th start and is tied with Tony Gonsolin of the Los Angeles Dodgers for the most wins in the National League.

Wright worked seven strong innings in his most recent start against the Washington Nationals on July 14, allowing two runs on seven hits, one walk and four strikeouts. He became the first Atlanta pitcher with 11 wins before the All-Star break since Jair Jurrjens had 12 in 2011.

“It’s great that I had a good first half, but obviously this is just one half,” Wright said. “The second half is going to be even bigger.”

This will be Wright’s first career appearance against the Angels.

Sandoval will make his 16th start of the season. He took the loss in his most recent start on July 15 when he pitched 4 2/3 innings against the Dodgers and allowed four runs (two earned) on seven hits, three walks and three strikeouts.

Los Angeles will be without center fielder Mike Trout, who was placed on the 10-day injured list with inflammation in his left rib cage. The Angels recalled outfielder Dillon Thomas and sent infielder David MacKinnon to Triple-A Salt Lake. They claimed infielder Phil Gosselin off waivers from Atlanta and put him on the active roster. Gosselin appeared in 104 games for the Angels last season and hit .261 in 12 games for Atlanta this season.

The Angels have struggled to score, and manager Phil Nevin is trying to get his batters to concentrate on hitting the heater.

“I think the dialog in some of our meetings has changed a little bit, focusing on hitting off the fastball,” Nevin said. “That’s something I prefer to talk about, really. Breaking balls, off-speed pitches, the ones you hit are mistakes. But if you’re not ready to hit a fastball, you’re not going to hit any of those pitches, and we haven’t. The focus is becoming stronger on hitting off the fastball.”

Olson hit his 18th home run in the series opener and drove in two runs, giving him 62 RBIs this season. Over his last five games, he has three homers and 10 RBI.