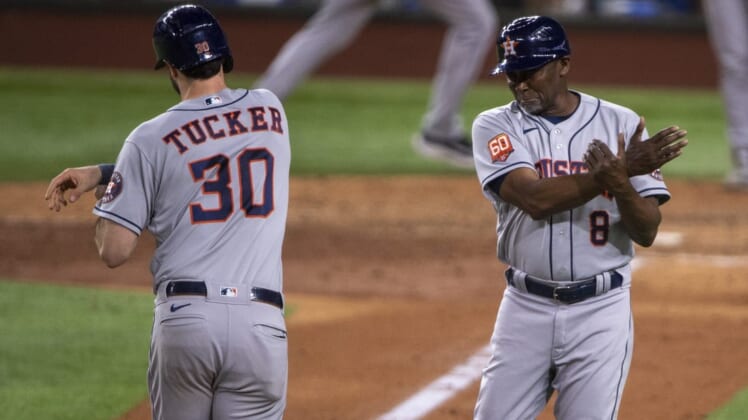 Kyle Tucker ripped a two-run homer in the eighth inning as the visiting Houston Astros took advantage of a shaky Texas bullpen to beat the Rangers 4-3 on Tuesday to assure at least a split of the teams’ three-game series in Arlington, Texas.

The Astros trailed 3-0 to start the eighth and had not recorded a hit since the third inning, but Jose Altuve opened the frame with a single off Texas reliever John King and went to third on a single by Michael Brantley.

Alex Bregman hit a grounder to shortstop Corey Seager, who elected to try to throw out Altuve at home. An error in the ensuing rundown allowed Altuve to score, and Brantley and Bregman both moved into scoring position.

A groundout by Yordan Alvarez plated Brantley and cut the Astros’ deficit to 3-2. Tucker then hit the first pitch he saw from King over the right-centerfield fence to put Houston in front for good.

The rally allowed Bryan Abreu (4-0), who allowed a hit and struck out one in the seventh, to earn the win. He was followed on the mound by Rafael Montero and Ryan Pressly, who allowed two hits in the ninth but still earned his 12th save.

Texas added to its advantage in the fourth on a two-out, two-run homer to right-centerfield by Nathaniel Lowe, with Adolis Garcia scoring ahead of him.

Dane Dunning produced his best game of the season, allowing no runs on two hits, four walks and a hit batter while striking out four in six innings.

Urquidy also had a quality start, surrendering three runs on five hits with no walks and four strikeouts. Neither pitcher was involved in the decision.