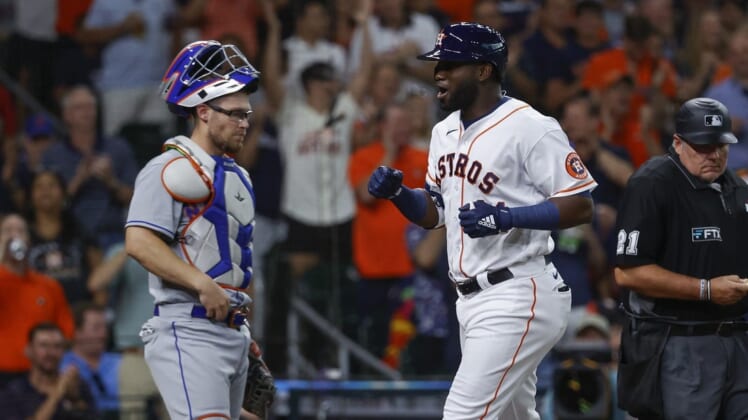 Kyle Tucker drilled a bases-clearing double in the fifth inning to lend support to Jose Urquidy, whose quality start helped the Houston Astros earn an 8-2 interleague victory over the visiting New York Mets on Tuesday.

By taking the opener of a two-game series, Houston won for the fifth time in six games. New York has dropped two of its past three.

Tucker delivered the decisive blow with two outs in the Astros’ four-run fifth. He drilled a 2-0 fastball from Mets left-handed reliever Chasen Shreve to right-center field to plate Jose Altuve, Michael Brantley and Yordan Alvarez and fiving Houston a 6-0 lead.

Shreve, summoned at the start of the fifth ostensibly to face the left-handed-hitting Alvarez and Tucker, walked Alvarez on four pitches before falling behind against Tucker.

Two batters after Tucker’s double, Mauricio Dubon produced a run-scoring single. Dubon was the fourth consecutive batter to reach with two outs. The Astros scored two of their three runs in the third with two outs.

Altuve broke the seal on a scoreless tie with his 13th home run, lining a 2-1 pitch from Mets right-hander Trevor Williams (1-4) into the left field seats with one out in the third.

Alvarez, who missed the series finale against the Chicago White Sox on Sunday with a hand injury sustained a day earlier, followed a walk by Alex Bregman with his 19th homer to extend the Houston advantage to 3-0.

Urquidy (6-3) allowed one run on four hits and one walk with five strikeouts in six innings.

He fired ran into trouble in the fourth, surrendering back-to-back singles to Pete Alonso and Mark Canha before Astros first baseman Yuli Gurriel misplayed a Luis Guillorme grounder into an error that loaded the bases.

Urquidy responded by striking out Eduardo Escobar and J.D. Davis to snuff that threat. He followed by retiring six of the final seven batters he faced, allowing a one-out homer to Alonso in the sixth.

Alonso wound up with three hits, including his 20th long ball of the year. Escobar hit his sixth homer off Phil Maton in the seventh.

Houston’s Jose Siri capped the scoring with a solo shot, his third homer, in the eighth against Adonis Medina.