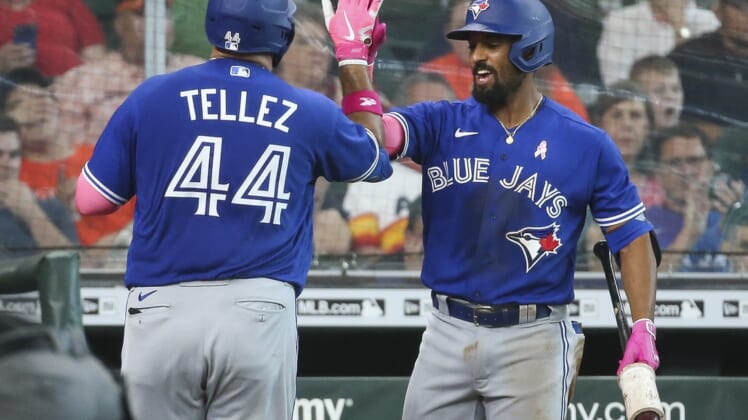 Kyle Tucker homered for the first time since April 24 and the host Houston Astros claimed the rubber match of their three-game series with the Toronto Blue Jays with a 7-4 victory on Sunday.

Tucker entered the series finale with just one hit over his last 15 plate appearances. He worked a leadoff walk and scored the Astros’ first run in the second inning before adding an RBI triple in the third and a three-run homer that completed a four-run rally in the fourth.

The homer was the sixth of the season for Tucker, who matched Yordan Alvarez for the club lead. Tucker finished 2-for-3 with three runs scored and a season-high four RBIs.

The Astros grabbed a 7-0 lead after Tucker crushed a 3-0 fastball from Toronto left-hander Anthony Kay 388 feet into the upper deck in right. That margin appeared safe enough for Astros starter Zack Greinke, who had allowed four baserunners over his first four innings of work.

But Toronto fashioned a sudden rally to open the fifth, as the first five batters reached safely to chase Greinke and prevent him from earning the win. Rowdy Tellez began the uprising by blasting a Greinke curveball 413 feet to right for his second homer. Reese McGuire and Marcus Semien followed with singles that registered exit velocities of 99.9 miles per hour.

When Vladimir Guerrero Jr. followed a two-run double by Bo Bichette with an RBI single, the deficit was three runs and Greinke was pulled. Greinke has logged just four innings in each of his last three starts, surrendering 11 earned runs on 16 hits and six walks during that span.

Nate Pearson (0-1), the Blue Jays’ top prospect, allowed three runs on four hits and five walks over 2 1/3 innings. He did not record a strikeout.