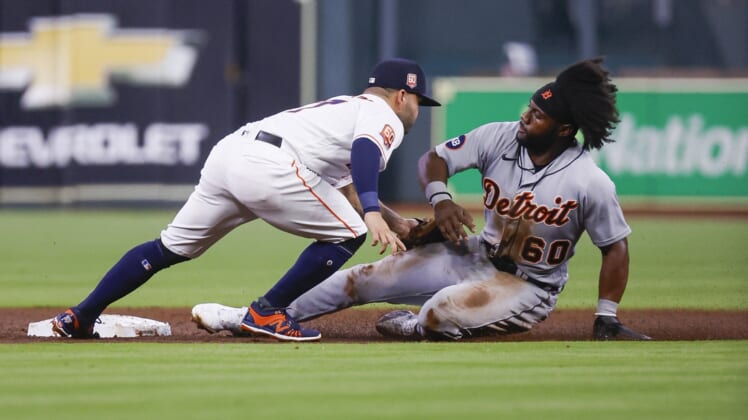 Kyle Tucker delivered a walk-off single in the ninth inning and the Houston Astros claimed the opener of a four-game series with the visiting Detroit Tigers, 3-2, on Thursday.

Tucker plated pinch runner Chas McCormick with his opposite-field single to left field off Tigers left-hander Gregory Soto (1-2). McCormick ran for Yordan Alvarez, who had singled to open the ninth.

The Astros have won four consecutive games and eight of their last 10.

Trailing 2-0 with two outs in the top of the ninth, the Tigers rallied behind Miguel Cabrera and Jeimer Candelario. Cabrera recorded his third hit of the game and the 3,008th of his career to pass Al Kaline for 30th on the career list.

Candelario then smacked a two-run homer to right off Astros closer Ryan Pressly, who had missed the previous 18 games with right knee inflammation.

The Astros have won the opening four games of their current seven-game homestand behind strong starting pitching and timely displays of power.

Right-hander Jose Urquidy allowed six hits and one walk while recording three strikeouts in his strongest start of the season. He allowed just two baserunners into scoring position and kept the Tigers off balance with a deft blend of four-seamers, changeups, curveballs and cutters. Urquidy threw 91 pitches, 60 for strikes.

Detroit fashioned scoring threats in the first and fifth innings. Robbie Grossman smacked a one-out double to right-center field in the top of the first before Urquidy followed with a pair of ground-ball outs to keep the Tigers off the scoreboard. When Tucker Barnhart and Akil Baddoo stroked two-out singles in succession in the fifth, Urquidy induced Grossman into a groundout.

Urquidy continued an exceptional stretch for Houston starters, who were a combined 7-3 with a 2.25 ERA and .181 opponent batting average over the previous 10 games. Urquidy followed by producing the eighth start of at least six innings over an 11-game stretch.

Tigers left-hander Tarik Skubal nearly matched Urquidy pitch for pitch but was undone by a first-pitch sinker to Jose Altuve in the first and a 2-2 knuckle-curve that Pena drilled 426 feet onto the home run porch in left-center leading off the fifth.

Altuve gave the Astros a 1-0 lead with his third homer before Jeremy Pena doubled that lead with the sixth home run of his rookie season.

Skubal allowed just four more hits and did not walk a batter while recording a season-high nine strikeouts over six innings. He had struck out nine Astros in his prior start against them, last season.