At least San Francisco 49ers head coach Kyle Shanahan can keep a sense of humor about the inevitably controversial quarterback situation he has on his hands with rookie Trey Lance and incumbent starter Jimmy Garoppolo.

To his credit, Shanahan has been transparent about Jimmy G being the unambiguous QB1 entering the 2021 campaign, but the coach did say that Lance, the No. 3 overall draft pick, is going to see playing time under center this season.

Speaking to reporters — and predicting what they’d do with the information he was dropping — Shanahan explained the type of role he envisions for Lance.

Can the 49ers make the postseason despite their QB controversy? Find out in our NFL playoff predictions

Although many will criticize the level of competition at North Dakota State and his relative inexperience, Trey Lance’s stats from college are impossible to ignore, particularly in 2019. He led the Bison to a national title that year, and threw 28 touchdowns to zero interceptions, and ran for 1,100 yards and 14 scores.

Obviously, there’s appeal to the fact that Lance didn’t throw a single pick in his only full season as a starter. That hints at advanced decision-making and maturity beyond his years. Where he can really bring some juice to the Niners’ offense is with his running ability.

Garoppolo is a pure pocket passer who’s limited in terms of extending the play, making plays outside the structure of Shanahan’s system and executing designed runs. These are all areas where Lance’s elite athleticism should allow him to shine. 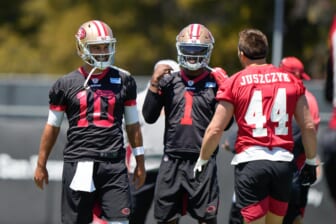 San Francisco’s scheme is built on an outside zone rushing attack. Lance has the type of ball-carrier vision and speed to simply take a shotgun snap and run the ball straightaway. Limited doses of this will keep a defense completely off-balance, and will open up the field for easy throws off play-action fakes.

Because Shanahan’s offense is so QB-friendly by design, Lance’s leap to the NFL is going to be easier in many ways compared to his draft classmates. On the other hand, it’ll take some time for him to nail the nuances of Shanahan’s schematic complexities, but Lance’s dual threat skill set increases his margin for error.

Why Kyle Shanahan’s strategy for Trey Lance is perfectly conceived

The only reason Lance was drafted in the first place is because Garoppolo has struggled to stay healthy. When Jimmy G has been on the field, he’s played at a high level, leading the Niners to a 13-3 record and a Super Bowl appearance in 2019.

By committing hard to Garoppolo, and being straight-up with him, San Francisco is succeeding where the Green Bay Packers failed with Aaron Rodgers. To trade up and sacrifice multiple future first-round picks to do so, it’s no surprise the 49ers want to find ways to use Lance as soon as possible, even if Garoppolo starts.

Sitting, learning, digesting Shanahan’s dense playbook and observing how Garoppolo works through a week of preparation leading into an NFL Sunday? All valuable experiences Lance can draw on later.

But what Lance really needs above all else is live action. He played just one game in 2020, and again, had only the one season starting in college. Easing Lance onto the field with special package plays, as opposed to charging him with taking the reins as the franchise QB right away, seems like the most ideal way to fast-track Lance’s development.

Meanwhile, even the threat of Lance suiting up on game days means defensive coordinators have to prepare a little extra for him. Trying to stop a Shanahan-coached offense is hard enough. Lance is going to make the challenge for opponents even steeper right away — and could wind up being a defense’s worst nightmare before long.

There’s a strong case to be made for Trey Lance to be the 49ers’ Week 1 starter. Read all about it here