San Francisco 49ers coach Kyle Shanahan doesn’t see a reason to name a Week 1 starting quarterback yet — other than to get reporters to stop asking him.

Asked Wednesday about the status of the competition between Jimmy Garoppolo and first-round draft pick Trey Lance, Shanahan said he had a “pretty good idea” of which quarterback he’d name to start, but wasn’t ready to share it yet.

“If there would be one reason I can think of by naming it that would help, it’d be to end those questions,” Shanahan said. “If you could give me another reason that it’s a big advantage that helps our team, affects anything that has to do with us, then I will name it. But I don’t think it does.

“And you know, why tell people? I know you guys want an answer, which is fine. I get the suspense of it, but I’m not just going to answer it to end your guys’ suspense.” 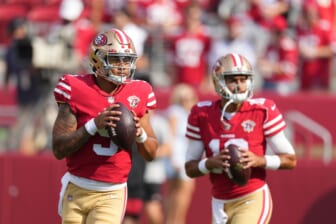 It leaves the 49ers as the one of the few remaining teams without a Week 1 starter solidified — or at least publicly known.

Garoppolo was asked Wednesday if Shanahan had divulged to him which quarterback would start Week 1 against the host Detroit Lions.

Shanahan said at the start of training camp that Garoppolo was entering camp as the No. 1 on the depth chart and Lance, the No. 3 overall pick in April, would start as second string. The fifth-year Niners coach also said this month that Lance would see the field at least “situationally” during his rookie season.

Reports out of San Francisco’s camp have said Lance has received more first-team snaps of late.

Garoppolo has a 22-8 regular-season record as the 49ers’ starter but has battled a number of injuries, including a torn ACL and two high ankle sprains. He started Super Bowl LIV for the Niners, a game they lost to the Kansas City Chiefs.