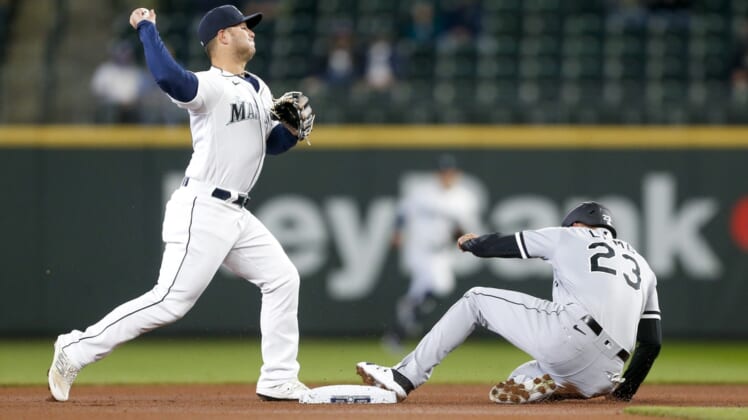 Kyle Seager had three hits, including a tiebreaking three-run double, as the host Seattle Mariners salvaged the finale of a three-game series, beating the Chicago White Sox 8-4 Wednesday afternoon.

Trailing 4-1, the Mariners scored seven times in the bottom of the sixth inning.

Jose Marmolejos led off with a walk and Dylan Moore dumped a single into shallow right field, with both runners advancing on a throwing error by outfielder Adam Eaton.

Right-hander Matt Foster (0-1) replaced starter Dallas Keuchel but was unable to get out of the inning.

Tom Murphy singled on a sharp grounder off the glove of third baseman Jake Lamb to load the bases. Rookie Taylor Trammell lined a run-scoring single to right, as did J.P. Crawford an out later to make it 4-3.

Mitch Haniger’s sacrifice fly to right tied the score and Ty France walked to re-load the bases. Seager lined a 96-mph fastball down the left-field line to clear the bases. Marmolejos lined a single to right to score Seager with the final run of the inning.

The White Sox took a 3-1 lead with a three-run fifth. Billy Hamilton led off with a walk and, an out later, Eaton also reached on a base on balls.

A double steal put runners at second and third before Lamb walked to load the bases. After Jose Abreu popped out, Dunn walked Yasmani Grandal to bring home a run and tie the score at 1.

Vest was summoned from the bullpen and Zack Collins greeted him by grounding the first pitch into left field for a two-run single.

The White Sox added a run in the sixth as Nick Madrigal led off with a double and scored on Danny Mendick’s one-out single.

Seattle’s Evan White and Chicago’s Hamilton both left the game with leg injuries suffered on the basepaths.