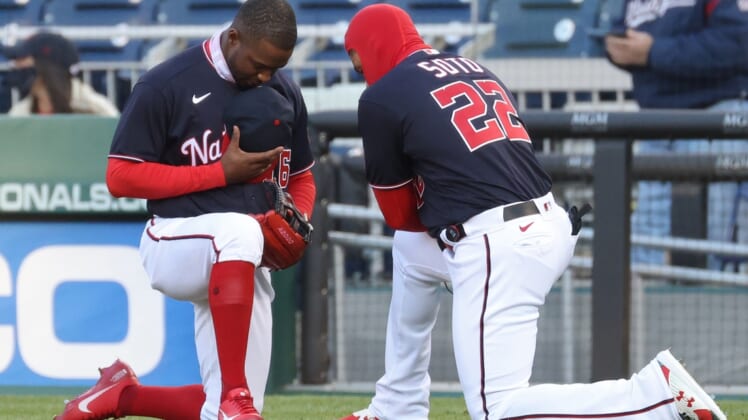 Kyle Schwarber homered in the bottom of the ninth inning to give the host Washington Nationals a 1-0, walk-off win over the Arizona Diamondbacks on Friday.

It was Schwarber’s first homer as a National, and it broke an 0-for-12 skid.

“To be able to put that swing on the ball there and give us a win, can’t ask for anything better,” he said during an on-field interview after the game.

Brad Hand (1-0) pitched a scoreless ninth inning for the win. Three Washington pitchers limited the Diamondbacks to three hits and two walks while striking out 13.

One night after the Diamondbacks clubbed four home runs off Washington pitchers in an 11-6 win, Nationals starter Max Scherzer shut them out for seven dominant innings. He allowed two singles while striking out 10 and walking two over 106 pitches.

Over his past two starts, Scherzer has allowed one run in 13 innings. He has 24 strikeouts in 19 innings over his three starts this season.

Harrison and Starlin Castro singled with one out in the Washington second, but Widener retired Alex Avila and Victor Robles.

Before the game, Nationals manager Dave Martinez said starting pitcher Jon Lester is getting closer to returning from his stint on the COVID-related injury list.

Martinez said Lester felt good after throwing a three-inning, 49-pitch simulated game in Fredericksburg, Va. The left-hander is likely to make at least one more rehab start before rejoining the rotation.