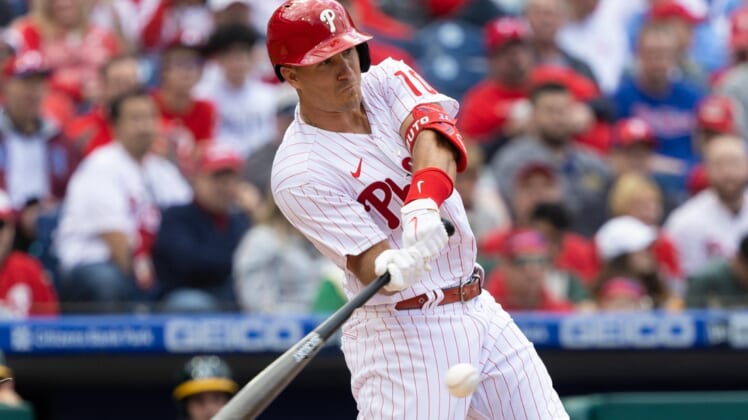 Newcomer Kyle Schwarber homered on the seventh pitch of the bottom of the first inning Friday and Brad Hand pitched out of a jam in the seventh inning as the Philadelphia Phillies earned a 9-5 Opening Day victory over the visiting Oakland Athletics.

In the first of a three-game series between teams that used to share Philadelphia as a home, the Phillies also got two hits from rookie hotshot Bryson Stott and a seven-strikeout performance from Aaron Nola (1-0) over six-plus innings.

The teams finished within four wins of each other last year – Oakland had 86, while Philadelphia had 82 — before undergoing major changes in the offseason.

Batting fifth in a lineup that no longer includes Mark Canha, Matt Chapman and Matt Olson, Seth Brown belted a three-run homer in a four-run seventh for the A’s, who nearly erased all of a 6-1 deficit and had two runners in scoring position before Hand struck out Jed Lowrie to preserve a one-run lead.

Nick Castellanos doubled home Bryce Harper for a 7-5 lead in the seventh, before scoring two runs in the eighth on a Stott RBI double and and a Schwarber RBI single.

Schwarber’s home run leading off the home half of the first inning came off Frankie Montas (0-1), who assumed Opening Day honors after the A’s also traded front-line starters Chris Bassitt and Sean Manaea.

Harper had an RBI double and Rhys Hoskins had a two-RBI single in a four-run third that allowed Nola to pitch comfortably into the seventh, having allowed just a solo homer to Chad Pinder in the fourth.

Brown’s homer for the A’s came after Sean Murphy opened the seventh with a double and Pinder followed with a single. Nola was pulled with a 6-4 lead and charged with four runs in his six-plus innings. He allowed four hits and didn’t walk anyone.

Montas lasted just five innings and was charged with five runs on six hits. He walked one and struck out six.

Schwarber and Hoskins finished with two hits and two RBIs apiece for the Phillies, who out-hit the A’s 11-6.

Pinder had two hits for the A’s, whose new-look lineup struck out 11 times.