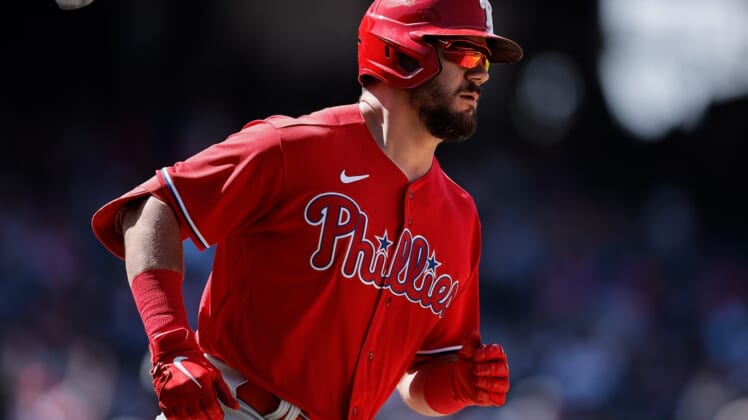 Schwarber launched a home run on Saturday and two more on Sunday against the New York Mets, a trend he will look to continue as Philadelphia opens a two-game series with the visiting Texas Rangers on Tuesday.

Schwarber is hitting just .200 in his first season with the Phillies but has produced seven home runs and 16 RBI.

“You can’t look too far in the past,” Schwarber said after his club lost two of three to the Mets. “You’ve got to be able to move on to the next one. We’ve got Texas coming up. Take care of business there. These guys (Mets) come back into town, and we’ll see what happens.”

The Phillies will hand the ball to Ranger Suarez (2-0, 4.42 ERA), who has never faced the Rangers in his career.

Philadelphia has won only two of its seven series. With a pair of wins over the Rangers, the Phillies can move back above .500.

Before looking ahead to another key four-game series against the Mets, it’s time to face a talented Texas team.

“That’s a good team over there,” Bryce Harper said of the Mets. “We need to take (Monday) off, understand that we need to beat Texas and be ready for the Mets again.”

Major League Baseball rosters had to be reduced from 28 to 26 active players by Monday and the Phillies optioned pitchers Damon Jones and Christopher Sanchez to Triple-A.

The Rangers will look for their third consecutive victory when they visit Philadelphia.

Texas defeated the Atlanta Braves 7-3 on Sunday thanks in large part to playing fundamental baseball.

Since spring training, manager Chris Woodward has been imploring the team to focus on every offensive aspect, not just home runs. On Sunday, the Rangers executed sacrifice bunts, stolen bases — all the little things that help win games.

“As soon as they get on base, they’re ready to run,” Woodward said. “The goal is to just add constant pressure. And have good at-bats. Like how are we going to create offense? Guys are starting to understand that you don’t have to go out and hit five home runs to score. You can walk, you can bunt, you can do lots of things to put pressure.

“When we create that kind of pressure offensively and actually go up like that, we can score. You don’t have to blast balls all over the plate,” Woodward added.

Gray hasn’t pitched since April 19 when he allowed three hits and four runs in five innings on the road against the Seattle Mariners.

The Rangers optioned Sam Huff and Willie Calhoun to Triple-A to get down to 26 active players.