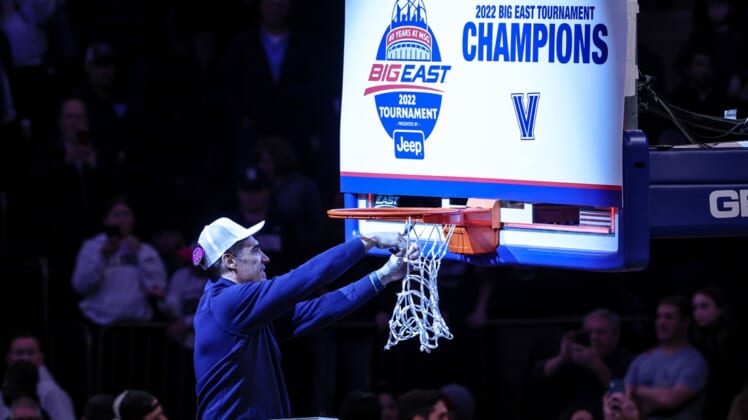 Kyle Neptune plans to make only minor modifications to the Villanova program, a nod to outgoing head coach Jay Wright.

“Obviously this is a dream come true,” Neptune said at his introductory press conference Friday.

Wright, who led the Wildcats to national titles in 2016 and 2018, was present Friday morning after leading the men’s basketball awards banquet for the final time Thursday, which occurred 24 hours after his retirement at age 60 became official.

“We’re excited to turn the reins of this treasure of a program over to Kyle,” Wright said. “Kyle was a part of our staff for 10 years, helped us win two national titles and returns after a successful season (at Fordham). He understands our culture and will keep it strong.”

Neptune was an assistant to Wright at Villanova from 2013 to 2021. He was hired as Fordham’s head coach last season, but couldn’t pass up the opportunity to return and replace Wright. Wright said he will be part of the program in a yet-to-be defined role that will include fundraising and consulting. He’s also planning to enter broadcasting.

Wright said he knew “at some point during the season” that this would be his final year as a head coach but didn’t want to distract from the team’s mission of getting to New Orleans for the Final Four. Villanova reached the national semifinals and lost to eventual national champ Kansas.

His retirement was a shock around the college basketball world and for former players and assistant coaches. Neptune had already interviewed to be Wright’s replacement, and Villanova said it talked to several other qualified candidates.

“I was under Coach for a good amount of my life with Villanova,” Neptune said. “What it stands for is embedded in me as a person. I would imagine that a lot of things will be very similar. I’m not Jay Wright. I can’t be exactly like him. There will be a lot of very similar things.”

Neptune said he plans to keep the entire coaching staff, sans Wright, in place and has spoken to all three players in the 2022-23 recruiting class. He also met with his new team.

“One thing is … they knew I was as shocked as everyone else,” Neptune said. “Just making sure they understood that. I know these guys pretty well … and it’s a matter of building up relationships again.”