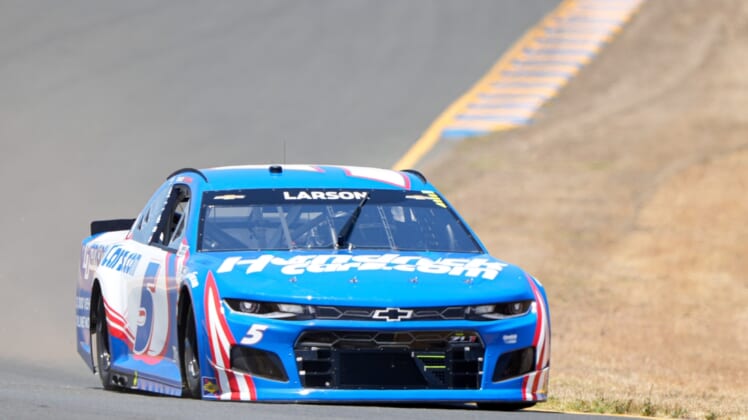 Kyle Larson won for the second straight week on Sunday when he got the overtime victory in the Toyota/SaveMart 350 NASCAR Cup Series race at the Sonoma Raceway road course in Northern California.

And for the second week in a row, Larson’s win came in dominating fashion as he led a race-best 57 of 92 laps.

He added two more stage wins to give him a series-best — by far — 11 on the season.

The victory was the Hendrick Motorsports driver’s third of the season, tying him with Martin Truex, Jr. of Joe Gibbs Racing.

Larson’s win was his first on a road course during his career.

Chase Elliott, Larson’s teammate, who won at the Circuit of the Americas road course two weeks ago and was second at the 600, finished second. The margin of victory was .614 seconds.

Martin Truex, Jr., looking to win his third straight at Sonoma, finished third despite having to start the race in the 19th position.

Joey Logano of Team Penske was fourth, with Kyle Busch of the Gibbs team rounding out the top five.

It looked like taking the checkers would be easy for Larson but a couple of wrecks way back in the field with five and three laps to go brought out yellow flags. The first abrogated his three-second lead and set up a restart with three laps to go.

On that restart, Larson easily pulled away — until a second wreck quickly occurred to set up overtime. After the final restart, Elliott, who has won six road races in his career, stayed close but could not pass.

A wreck with less than 20 laps to go cost a number of fast cars, including those of William Byron and Kevin Harvick, chances to win.

Anthony Alfredo and Scott Heckert were sent to the rear of the field for the start. In addition, Alfredo’s Front Row Motorsports crew chief, Seth Barbour, was ejected from the track for failing tech inspection. Heckert was penalized for an unapproved adjustment on his Live Fast Motorsports car.