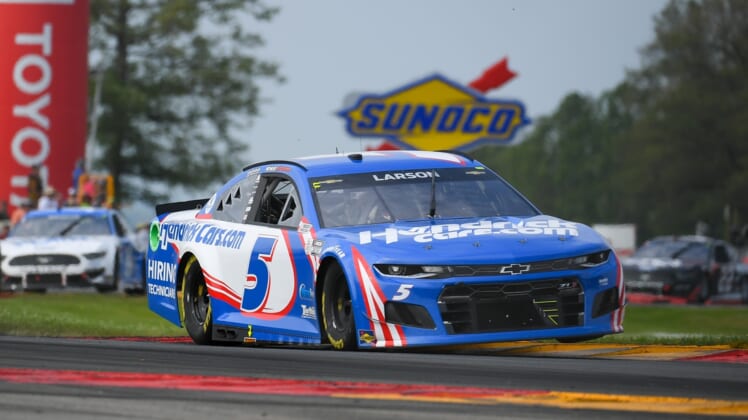 After a five-race absence, Kyle Larson returned to victory lane on Sunday when he won the Go Bowling at the Glen NASCAR Cup Series race at the Watkins Glen International road circuit.

The victory was Larson’s fifth of the season and second on a road course as he won at Sonoma back in early June.

It was the California native’s first win at the historic, seven-turn, 2.45-mile Watkins Glen track.

His victory came with a nice assist from his Hendrick Motorsports pit crew as it allowed him to pass leader Martin Truex, Jr. during green flag stops on Lap 57 of the 90-lap event.

Chase Elliott of the Hendrick team didn’t succeed in his attempt to win his third straight at the Glen but he also didn’t lose his unofficial title of king of the roads.

Elliott arrived at the track as a heavy favorite to win. He started the race, however, with those odds considerably lessened as he was forced to the rear after Elliott’s Hendrick Motorsports car failed pre-race inspection. He also started with crew chief Alan Gustafson booted from the pit box.

But up through the field Elliott came — a couple of times as an untimely pit stop to replace flat-spotted tires on Lap 31 killed his forward run — and with nine laps to go, he passed Truex on the track for second place.

He would close on Larson on the final laps but wound up 2.43 seconds back.

Joe Gibbs Racing’s Truex, who won at the Glen in 2017, finished third. Truex, who led a race-best 34 laps, was attempting to win his fourth race of the season.

Christopher Bell of Joe Gibbs Racing also was sent to the rear of the field for the start for failing pre-race inspection. And he, too, moved to the front. He was running second when he was spun in contact with Larson on Lap 55. Bell finished seventh.

The Cup Series will be back on a road circuit next week as racing moves to the Indianapolis Motor Speedway infield course.