Kyle Larson requested reinstatement to NASCAR earlier this week, according to The Athletic. Here's what this means for Larson and Hendrick Motorsports. 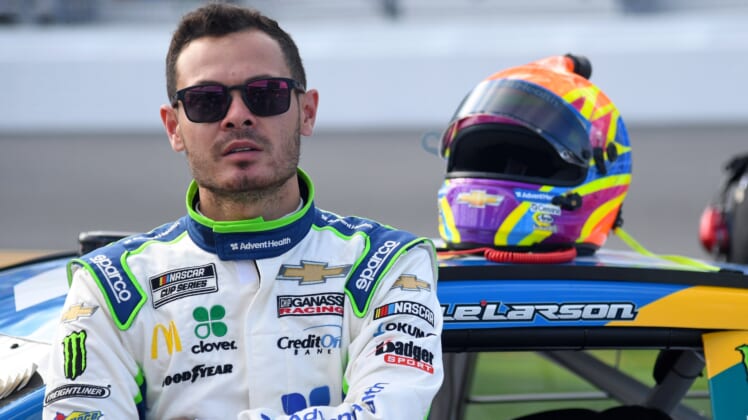 Kyle Larson has been trying to find his way back to NASCAR after putting in the effort to grow from his iRacing incident in April. Friday morning, Larson spoke to “CBS This Morning” about his suspension from NASCAR. Now, one domino in the process of announcing Larson to Hendrick Motorsports dropped today.

According to The Athletic’s Jordan Bianchi, Kyle Larson has requested reinstatement to NASCAR. Since he completed sensitivity training for the World of Outlaws, Larson has driven sprint card and competed in dirt racing.

Here’s what this means for Larson and Hendrick Motorsports as the announcement draws near.

Reinstatement is a big step for Kyle Larson

Larson has been active in recent months to learn from saying a racial slur during an iRacing broadcast. He has been active in local community work and wrote an essay to reflect on the months since the incident. Today, he took this to another level during an interview with CBS’ James Brown.

The 28-year-old California native has been suspended since mid-April. Without being reinstated, he wouldn’t be eligible to race until the suspension was lifted. Many assumed he wouldn’t join Hendrick Motorsports for the 2021 season, because he hadn’t applied for reinstatement,

However, it has been confirmed by multiple reporters that Larson is the leading candidate to take over the fourth car at Hendrick Motorsports. NASCAR is currently reviewing Larson’s request for reinstatement and should have an answer as they work with Larson.

Hendrick Motorsports can ease the PR hit from the move

A move like this would represent a lot more than wins and success for Hendrick Motorsports. With the circumstances surrounding Larson and his image, it would be a massive hit on the team’s public reputation. Many fans have said they don’t support Larson returning to NASCAR yet, which is understandable.

The news coverage of the announcement would range to networks outside of NASCAR such as FOX and CNN. If they can slowly leak the news out of an inevitable signing, it could ease the outrage and drama from the media coverage. Larson has been a controversial figure in this day and age due to the events going on in our country today.

The inevitable is coming for what was supposed to be one of the most shocking news stories of NASCAR silly season. Perhaps, this is what Hendrick Motorsports has wanted all along. Leaving the suspense out of a shocking move would ease the impact of their decision to bring Kyle Larson on board for 2021.

Rick Hendrick isn’t going to drop the ball this time.