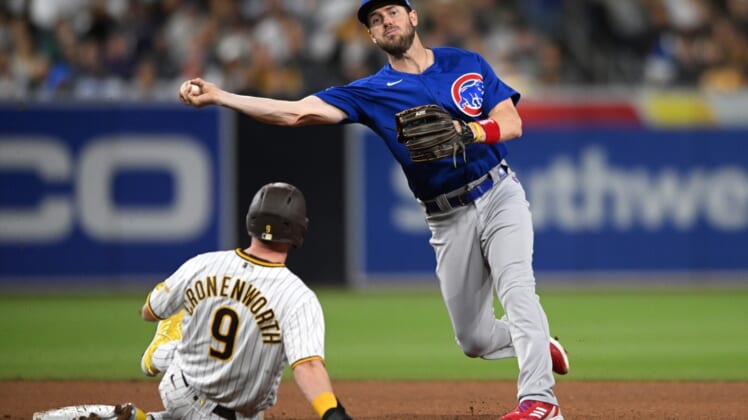 Hendricks held the Padres to three hits and a walk with seven strikeouts to improve to 2-3 on the season while lowering his earned run average from 5.64 to 4.38. He is now 8-2 in his career in 12 starts against the Padres with a 2.65 ERA.

The Padres’ only hits were a single by Eric Hosmer leading off the second, a two-out bunt single by Jose Azocar in the third and a seventh-inning single by Manny Machado. No Padre reached second and Hendricks didn’t have a three-ball count until he walked Jake Cronenworth with one out in the ninth.

Scott Effross got the final out for the Cubs after Hendricks threw 116 pitches.

Offensively, left fielder Ian Happ had an RBI single and a two-run double and designated hitter Wilson Contreras went 3-for-4 and played a role in three of the Cubs’ first four runs.

The Cubs, who had lost eight of their last nine games, took a 1-0 lead against Padres starter MacKenzie Gore before the rookie left-hander retired a hitter.

Contreras led off the game with a single and came around to score on Seiya Suzuki’s double. The Cubs added single runs in the fourth, fifth and seventh innings and two in the eighth.

That closed the book on Gore (2-1), who gave up three runs on seven hits and no walks with six strikeouts in five innings.

The Cubs added an unearned run in the seven against Padres reliever Craig Stammen. Heyward singled with two out, stole second and scored when second baseman Cronenworth’s throw on Contreras’ infield single bounced past first baseman Eric Hosmer. Happ added a two-run double in the eighth after Cubs manager David Ross successfully challenged an out call at first on what would have been an inning-ending double play.