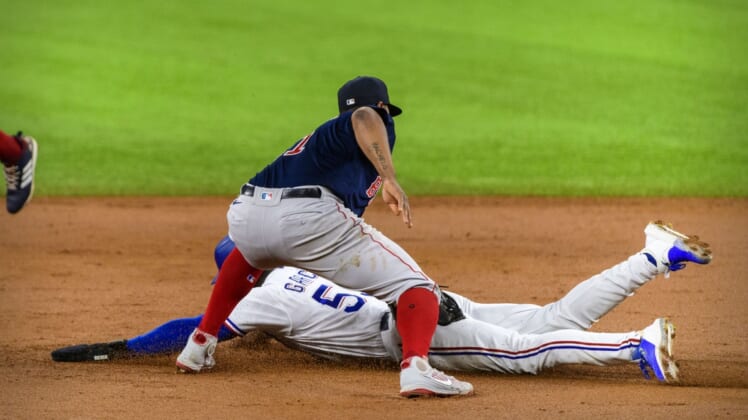 Jose Trevino hit a go ahead, two-run home run in the sixth inning to lift the Texas Rangers over the visiting Boston Red Sox 4-1 in the opener of a four-game series Thursday night.

Isiah Kiner-Falefa added a solo homer, his third of the year, in the seventh and Adolis Garcia also drove in a run for Texas. Rangers starter Kyle Gibson (3-0) held the Red Sox to one run on three hits with three walks and four strikeouts over six innings.

Texas, which had dropped six of eight games coming in, improved to 7-4 against AL East opponents this season.

Rafael Devers had an RBI double for Boston. Perez was charged with two runs, one earned, on five hits and struck out seven over 5 2/3 innings for the Red Sox, whose three-game winning streak was snapped.

Boston had won four of five to bounce back from a stretch of five losses in eight games.

Devers’ two-out double in the sixth tied the game at 1-1 before Kiner-Falefa’s decisive homer.

Kiner-Falefa’s homer came after Garcia reached on a fielding error by Red Sox shortstop Xander Bogaerts. Garcia also benefitted from a Boston error on his sacrifice fly in the fourth when Joey Gallo doubled and advanced to third on a fielding miscue by Devers.

The run snapped a stretch of 19 1/3 scoreless innings for Red Sox pitches.

Red Sox slugger J.D. Martinez was pulled for pinch hitter Christian Arroyo in the eight due to migraine symptoms, according to the team’s television broadcast. Martinez finished 0-for-1 with a pair of walks.

Ian Kennedy struck out two in a scoreless ninth for his fifth save of the year.