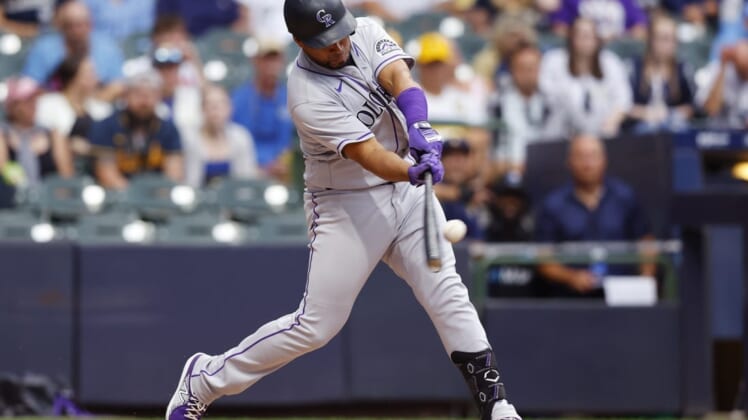 Kyle Freeland pitched seven stellar innings and the visiting Colorado Rockies held on for a 2-0 victory over the Milwaukee Brewers Monday night to salvage the finale of a four-game series.

The Rockies snapped a team-record eight-game losing streak to Milwaukee with a crisp performance from Freeland, who entered with an 8.44 ERA in his past three starts.

Freeland (5-7) allowed four singles after yielding 40 hits over his past six starts and helped the Rockies dodge a sweep after they lost two games in the final at-bat. He struck out seven, walked one and completed seven innings for the fifth time this season.

Batterymate Elias Diaz homered and also made a key defensive play by throwing out Luis Urias on a stolen base attempt. Garrett Hampson had two of Colorado’s five hits and scored on a sacrifice fly by Yonathan Daza to support Colorado’s fourth shutout of the season.

Milwaukee’s Aaron Ashby (2-8) took a tough loss in his first start since inking a five-year contract extension Saturday. Ashby allowed two runs on five hits in seven innings to go along with nine strikeouts as he threw 81 of his career-high 111 pitches for strikes.

Lucas Gilbreath followed Freeland’s big outing by striking out two in a perfect eighth. Daniel Bard wriggled out of a bases-loaded jam for his 21st save in 23 opportunities.

The Brewers were blanked for the ninth time and had three chances with the winning run after second baseman Brendan Rodgers bobbled a potential double-play grounder by Willy Adames. After Bard got two outs, pinch hitter Rowdy Tellez walked but Urias lined out to Rodgers, who caught the final out just before it bounced on the edge of the infield dirt.

Colorado went ahead in the third when Diaz lifted an 0-1 slider over the left-center field fence for his sixth homer.

Freeland lost the early no-hit bid when Andrew McCutchen singled. One pitch later, Hunter Renfroe ended the fourth by hitting into a 4-6-3 double play on the hardest-hit ball Milwaukee put in play against Freeland.

Hampson singled, stole second, took third on a Charlie Blackmon groundout and scored on Daza’s fly ball to right for a 2-0 lead in the fifth.