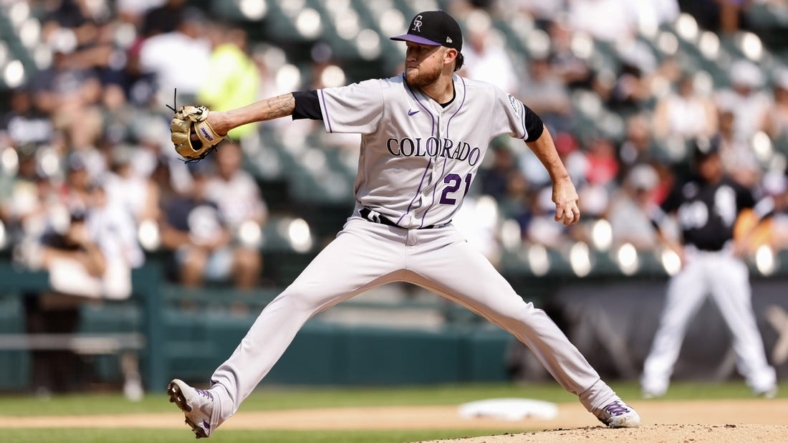 Kyle Freeland pitched into the seventh inning and the visiting Colorado Rockies earned a two-game split of their interleague series against the Chicago White Sox with a 3-0 victory on Wednesday afternoon.

Freeland (9-9) allowed seven hits over 6 2/3 scoreless innings with three walks and five strikeouts. Daniel Bard struck out the side in the ninth for his 30th save.

Chicago had won five of its previous six games, but squandered several scoring opportunities in the series finale. The White Sox left nine runners on base and were 0-for-11 with runners in scoring position.

Colorado (62-81) snapped a two-game losing skid and won for the seventh time in its last 27 road games. Ryan McMahon and Yonathan Daza had two hits apiece.

The Rockies mounted a charge in the first inning against White Sox starter Dylan Cease (14-7), who had pitched 15 scoreless innings over his last two starts.

Cease turned back the rally and stranded the bases loaded with two outs, when Randal Grichuk popped out to first baseman Jose Abreu.

The Rockies broke through with two runs in the second. Alan Trejo doubled in a run and scored on Daza’s two-out single to left field.

Chicago put the leadoff man on base in each of the first four innings but went 0-for-7 with runners in scoring position during that stretch.

The White Sox had two on and no outs in the fourth before Freeland retired the next three batters in order. Daza ended the inning with a running catch on Seby Zavala’s fly ball to the left-field wall.

Colorado stretched its lead to 3-0 in the fifth when McMahon delivered a leadoff double and scored on C.J. Cron’s one-out single.

The White Sox threatened again with two on and two out in the seventh, but Carlos Estevez relieved Freeland and struck out Yoan Moncada to end the inning.