The Colorado Rockies recently inked left-handed starting pitcher Kyle Freeland to a five-year, $64.5 million deal. Freeland, 28, has spent his entire MLB career with the Rockies and now figures to spend the rest of his prime with the franchise.

Yes, the southpaw is off to a nightmare start after surrendering a combined 12 runs across his first three outings this season. With that said, this contract isn’t about three starts and is a worthwhile gamble for the Rockies. Here’s why Freeland’s extension is a bargain for the Rockies.

Kyle Freeland has succeeded in spite of pitching at Coors Field

A mile above sea level, Coors Field is a hitter-friendly park, which makes it difficult for starting pitchers to succeed and want to play for the Rockies long term. Freeland has pitched for the club at the big-league level since 2017. In other words, he’s accustomed to pitching at a high altitude.

Freeland is part of a handful of homegrown starting pitchers who have been with the team for quite some time and found a degree of success. German Marquez and Antonio Senzatela are among the other starters. Freeland is used to having minimal margin for error when it comes to inducing contact-outs.

Going on year six as a member of manager Bud Black’s starting rotation, Freeland is also familiar with the offensive firepower that the National League West throws at the Rockies. The Los Angeles Dodgers, San Diego Padres, and San Francisco Giants have highly productive and/or elite offensive attacks.

For better or worse, the Rockies know what they have in Freeland. There’s something to be said for that, as they could sign a pitcher similar to Freeland, but do not know how they’ll fare with the altitude.

Kyle Freeland still has some upside for the Colorado Rockies

To date, Freeland has experienced an up-and-down MLB career. Despite it all, he has maintained upside in his pitching arsenal.

The left-hander was the Rockies’ ace the last time they made the playoffs in 2018, posting a 2.85 ERA and silencing the Chicago Cubs in the NL Wild Card Game that season. Freeland followed up his heroics with a lackluster campaign in 2019. In the two seasons that followed, he got some mojo back but performed along the lines of a middle-of-the-rotation starter. 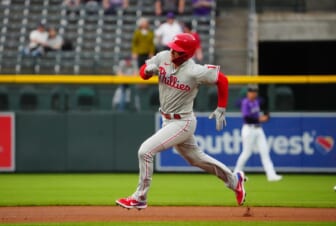 At his best, Freeland is a savvy, pitch-to-contact starter who can work out of trouble. It’s a matter of consistency for him. The compelling part of Freeland’s game is his pitch selection, as he consistently deploys five pitches: four-seamer, curveball, changeup, slider, and sinker.

There’s an upside in a pitcher with several pitch options. If they can get command and/or hit their spots with that many pitches, they become unpredictable — in a good way. Freeland is still young enough to grow into such a pitcher and be more like the starter who excelled in 2018 than the inconsistent one lately.

Worst-case scenario, Freeland is still a bargain at $64.5 million

There are two ways Freeland’s deal can play out. The positive outlook is that he builds on his respectable play of the last two seasons and returns to being a top-of-the-rotation starter. That would make his contract — which features a roughly $13 million average annual salary — highway robbery.

On the other hand, Freeland could continue to be a respectable middle-of-the-rotation talent. In that case, he’s making a fair salary from the Rockies’ point of view. It would cost them around $13 million a season to sign a starter with his track record on the open market anyway. 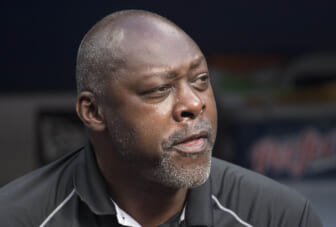 A five-year, $64.5 million deal for a starting pitcher who’s entering his prime and has shown flashes of being an All-Star is of tremendous value to the Rockies. The Rockies have their three best starting pitchers (Freeland, Marquez, and Senzatela) under contract through at least 2023.

Of course, they need a true ace to emerge, which is going to have to come through player development. But at the same time, there’s nothing to lose and a lot to gain by the Rockies extending Freeland.