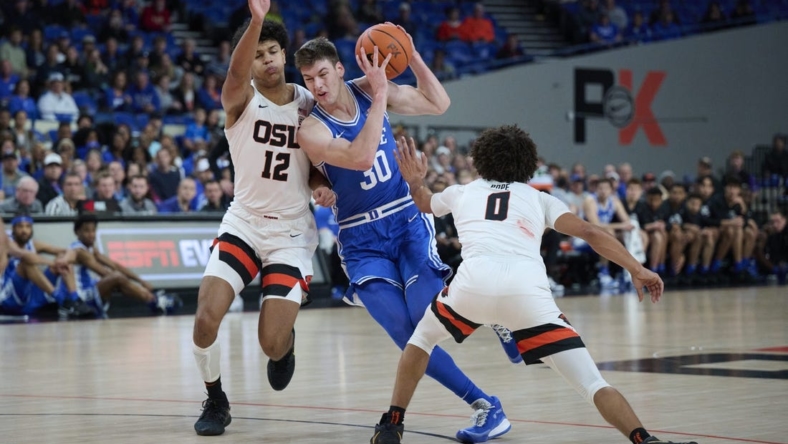 Kyle Filipowski scored 11 of his 19 points in the last 10 minutes to help No. 8 Duke pull out a 54-51 victory against Oregon State on Thursday in an opening-round game of the Phil Knight Legacy tournament in Portland, Ore.

Filipowski made only five of 13 shots from the field, but went 8-for-9 on free throws and grabbed 14 rebounds. Teammate Ryan Young had 11 points and 15 rebounds off the bench as the Blue Devils (5-1) won away from home for the first time under first-year coach Jon Scheyer.

Duke takes on the Florida-Xavier winner in Friday’s semifinals, while Oregon State meets the loser of that game in the consolation bracket.

The Blue Devils prevailed despite shooting 26.7 percent (16-for-60) from the field. Young had eight of his rebounds at the offensive end.

Duke was up 50-47 after two Filipowski free throws with 3:37 to play. Akanno’s foul shots 17 seconds later were the only points for either team until Filipowski scored with 37 seconds to play on a move close to the basket.

Akanno made two free throws at the 16-second mark to make it a one-point margin again. Duke’s Jacob Grandison then drained two foul shots for his only points of the game. Pope’s potential game-tying 3-pointer was off the mark.

Duke was hurt by 5-for-29 shooting on 3-pointers in its first game since making 14 shots from 3-point range at home against Bellarmine.

Oregon State led by six with 10 minutes to play.

Filipowski began Duke’s surge with a three-point play. His 3-pointer about 90 seconds later tied the score at 45-45.

Duke led 29-27 at halftime despite shooting 32.3 percent from the field. The Blue Devils offset the shooting woes by grabbing nine offensive rebounds before the break.