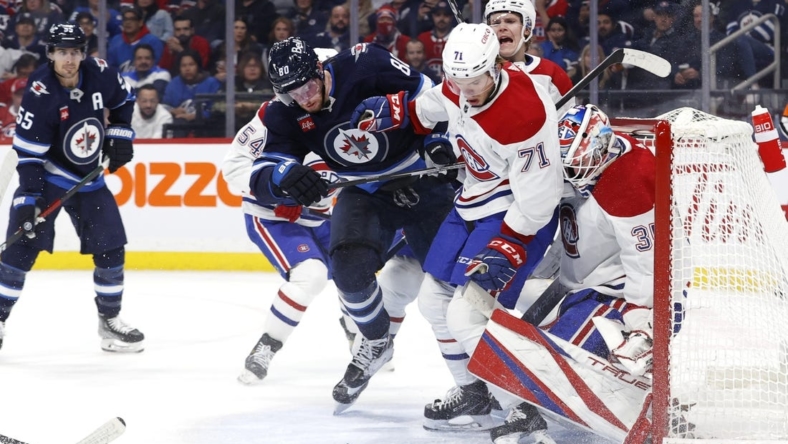 Kyle Connor scored 1:45 into overtime to lift the host Winnipeg Jets to a 3-2 win over the Montreal Canadiens on Thursday.

Connor wristed a shot past goalie Sam Montembeault after taking a pass from Mark Scheifele, with Josh Morrissey collecting his team-high ninth assist of the season on the play.

Pierre-Luc Dubois and Connor each had a goal and an assist and Blake Wheeler added a goal for Winnipeg, which won for the fourth time in five games.

Nick Suzuki notched a goal and an assist, Kirby Dach contributed a goal and Cole Caufield had two assists for the Canadiens, who lost their second game in a row.

Winnipeg outshot Montreal 36-22, including 11-4 in the third period, with Jets goalie Connor Hellebuyck and Montembeault finishing with 20 and 33 saves, respectively.

Suzuki gave Montreal a 1-0 lead at 6:43 of the first period when he wristed a shot over Hellebuyck after receiving a cross-ice pass from Caufield. David Savard also assisted on Suzuki’s sixth goal of the season.

The Jets equalized on a power play with 2:32 left in the opening period when Dubois wristed a shot past Montembeault. Connor and Sam Gagner assisted on Dubois’ fourth tally of the season.

The teams traded goals in similar fashion in less than a minute early in the second period.

Dach scored on a rebound when Hellebuyck couldn’t handle Suzuki’s shot at 4:54. But shortly after, Wheeler made Montembeault pay for his inability to make a clean save on Dubois’ wrist shot to tie the game 2-2 at 5:35.

The Jets have defeated the Canadiens in six of the teams’ past seven regular-season meetings, but Montreal swept a conference semifinal series vs. Winnipeg in 2021.

The Canadiens, who went 2-1-1 during their four-game road trip, host the Pacific Division-leading Las Vegas Golden Knights on Saturday before visiting the Detroit Red Wings on Tuesday.

Winnipeg continues its three-game homestand against the Chicago Blackhawks on Saturday before welcoming the Dallas Stars on Tuesday.