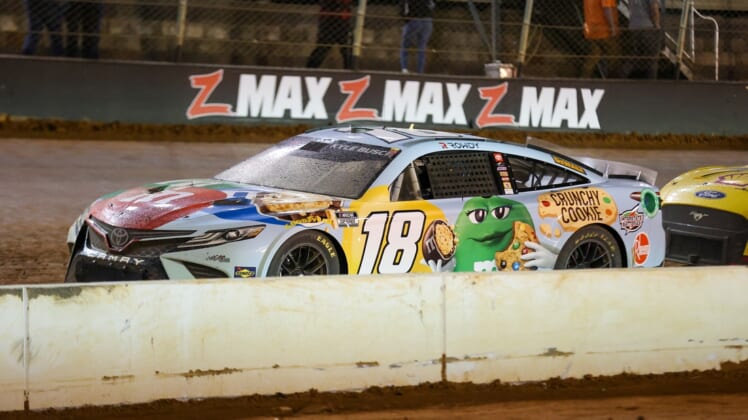 In a wild finish in NASCAR’s only Cup Series dirt event, Kyle Busch came from third to first off the final turn at Bristol Motor Speedway to win the Food City Dirt Race Sunday night in Bristol, Tenn.

Chase Briscoe ran down leader Tyler Reddick in a 24-lap shootout at the end, then Briscoe slid into Reddick and wrecked both cars, which slid down onto the Turn 4 apron.

Running third, Busch moved his Toyota by Reddick — who led a race-high 99 laps — to win for the first time in 2022.

The victory snapped a 25-race losing streak by Busch, an eight-time winner on Bristol’s concrete surface. It marked his 18th straight season with a Cup win.

Reddick, who finished second, held the point until rain brought the cars to pit road after the 13th caution with 28 laps to go.

In NASCAR’s first race on Easter Sunday since 1989, the first caution flew on Lap 13 when NASCAR gave the teams the option to bring their cars to pit road to clean their grilles after many of them developed a serious accumulation of clay.

With rain beginning to fall over the east Tennessee track dubbed the “World’s Fastest Half-Mile,” Briscoe and Daniel Suarez fought for the lead on Lap 140, with Briscoe edging ahead.

The Stewart-Haas Racing driver beat Christopher Bell to the stripe to win the second stage, but a red-flag delay began on Lap 151 as rain muddied the track.

Following the red-flag break, Briscoe and Bell fell back after one-third of the field stayed out for track position instead of pitting as the duo did.