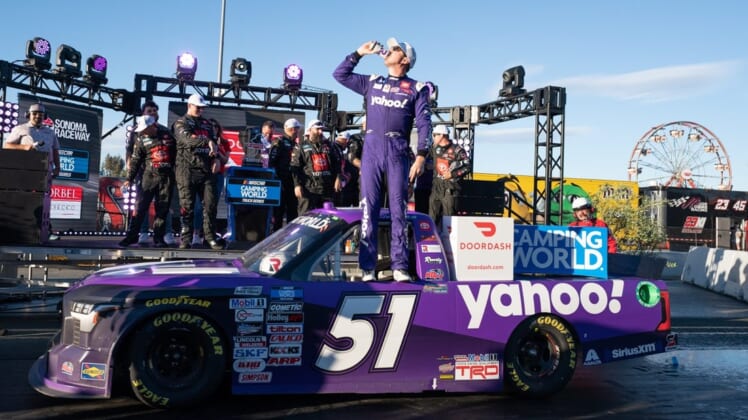 Kyle Busch held off Zane Smith in a frantic two-lap push to the finish at Sonoma (Calif.) Raceway to earn his first NASCAR Camping World Truck Series victory of the year.

He also extended his record career total to 62 series victories and a streak of 10 consecutive years with at least one series win.

Busch led a race-best 45 of the 75 laps in the DoorDash 250 at the 1.99-mile road course in California wine country, but ultimately had to beat the young driver Smith, who leads the series with three wins in 2022.

As the Camping World Truck Series’ all-time winningest driver, Busch has certainly prevailed under any number of race circumstances, and that all came in handy Saturday afternoon.

There were five leaders and 10 lead changes; a nearly 13-minute red flag in the closing laps and all the pit strategy you would expect in one of NASCAR’s premier road course events.

Ross Chastain certainly kept Busch and Smith honest until a late off-course adventure negated any chance for him to pull off any final-lap heroics. There were five NASCAR Cup Series drivers entered Saturday in the first Truck Series race at Sonoma since 1998.

“Just continuing to work on the truck and make it better,” Busch said of his team’s race-long work on the No. 51 Kyle Busch Motorsports Toyota, which has now won three times on the season, including last week with driver Corey Heim.

“This Tundra TRD Pro was awesome today and really proud to drive it. We had a struggle at Charlotte a couple weeks ago, but today was really good.”

Smith, who methodically worked his way forward later in the race, finished only 1.176 seconds behind Busch and conceded his team had to work hard on the truck at every pit stop — ultimately finding the right adjustments to contend at the end.

“Man, I hate finishing second, especially to him,” Smith said, offering a smile and adding, “That last lap was the fastest lap of the race for me. I just wish I was a little closer so I would have had a shot at him.”

Daniel Suarez, who replaced the injured driver Carson Hocevar early in the race, brought the pole-winning No. 42 Niece Motorsports Chevrolet home in sixth-place. It was an amazing run for Suarez and the team, considering the truck lost two laps on pit road with the driver change on Lap 11.

“It was busy, man, very busy,” Suarez said, conceding he was disappointed to lose two laps instead of just one on the driver change.

“I was hoping for long runs so I could make up some ground,” he continued. “But I think we did a very good job and very thankful we were able to get some stage points and finish in the top six. That was a pretty decent day. I wish we could have won; the truck was capable of winning the race.”

The top four-ranked drivers in the series are separated by only 14 points, with reigning series champion Ben Rhodes, the Stage 2 winner, challenging Busch up front before a tire problem forced him to pit.

Rhodes earned a series-best eighth stage win and holds onto the championship lead by a mere five-points over Chandler Smith.

The Camping World Truck Series moves to Knoxville, Iowa, next Saturday for the Clean Harbors 150 at the famed Knoxville Raceway (9 p.m. ET on FS1, MRN, SiriusXM NASCAR Radio). Austin Hill won the race at Knoxville in 2021.