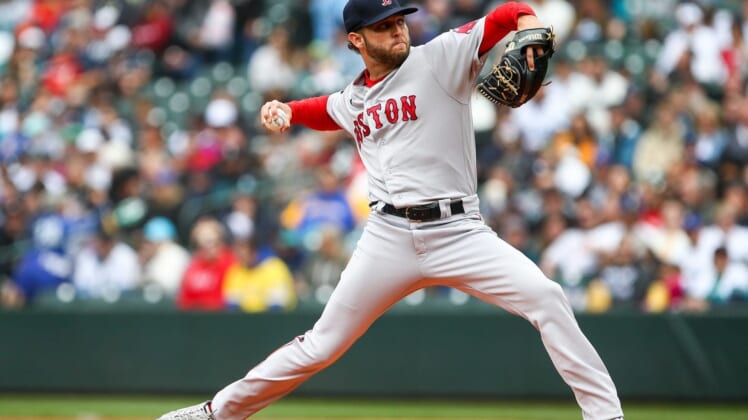 Rafael Devers hit a two-run home run in the eighth inning and six Boston pitchers combined on a one-hitter as the Red Sox defeated the host Seattle Mariners 2-0 Sunday afternoon.

With two outs in the eighth, Rob Refsnyder barely checked his swing on a two-strike pitch from Paul Sewald (3-2). The next pitch sailed inside and hit Refsnyder. Sewald got ahead 0-2 in the count to Devers, then threw a pitch up and away to the left-handed batter. Devers reached out and drove the ball just over the left-field wall for his 14th home run of the season.

Right-hander Tyler Danish (2-0) got the victory and Tanner Houck pitched a 1-2-3 ninth for his second save of the season — both in this series — as the Red Sox took two of three games.

Red Sox right-hander Kutter Crawford, making just his second major league start, pitched five scoreless innings, allowing just one hit — a two-out single to right by Luis Torrens in the fifth. Crawford was effectively wild, walking four and striking out seven as only 43 of his 83 pitches were in the strike zone.

Ryan Brasier pitched the sixth inning and Austin Davis got two outs in the seventh before walking pinch-hitter Dylan Moore, who had the winning hit in Seattle 7-6 victory Saturday. Moore stole second but Danish finished the frame by getting Torrens to ground out to shortstop Xander Bogaerts.

John Schreiber worked the eighth before Houck closed out the victory.

Seattle’s Adam Frazier walked with two outs in the second and stole a base, but Crawford caught Abraham Toro looking at a called third strike.

Taylor Trammell led off the bottom of the third with a walk and stole second, but was stranded there.

The only other time the Mariners got a runner to second was in the fifth, as Jesse Winker drew a walk after Torrens’ single. Crawford struck out Ty France, his final batter.

Mariners lefty Robbie Ray pitched seven scoreless innings. Ray gave up three hits, walked one and struck out four, with three of those coming in the first inning.